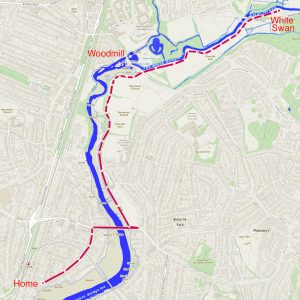 Back in May 2019 I invested in an Apple Watch with the idea of prompting myself to exercise more! The result has mainly been more frequent walks along the River Itchen. From where I live, Priory Road parallels the river and, crossing Cobden Bridge, in just under 1km I’m in Riverside Park on the east bank of the Itchen. Then it’s a bit over 1km through the park to Woodmill. Apparently the watermill there was still producing flour until the 1950’s and at one time there was also a mill producing ship’s pulley blocks. Nowadays Woodmill is an activity centre with an accent on canoeing. 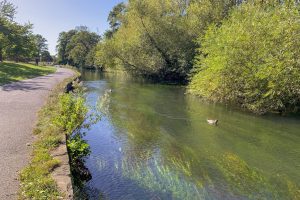 Beyond Woodmill the character of the river changes from a muddy tidal estuary  to the clear waters of a chalk stream. Because the chalk streams are mainly fed by springs that they maintain a relatively even temperature and have clear, slightly alkaline water, filtered by the chalk. 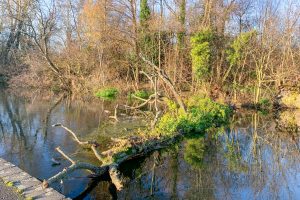 Riverside Park continues on the east bank while the west bank with the old salmon pool is initially part of the activity centre and then becomes a wooded nature reserve which is allowed to grow wild. Indeed, today one of the dead trees had come down across the river! 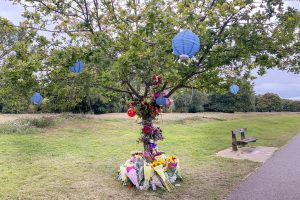 Back at the start of September there was an incident when gunshots were heard from the park area and a man’s body was found in the river. The man had not been shot but investigating Police discovered a cannabis farm in a nearby house. Whether, or how, all this was related I haven’t heard but a tree was turned into a touching memorial. 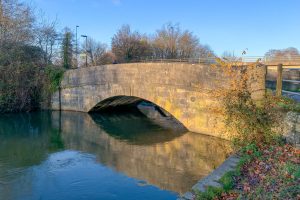 My walks terminated at or near the White Swan public house which is just beyond the old Mansbridge. Hard to imagine that, when I was doing my PhD in Southampton on the 1970’s this little bridge carried the main south coast road, the A27, across the river. Since then it has been replaced with a two lane concrete bridge which in turn has been augmented by a motorway bridge carrying a six lane motorway – which is now being “upgraded” to eight lanes.

If I stopped at the White Swan I’d sit in the garden there watching out for kingfishers on the opposite bank – once I saw one dive into the water. Upstream the river proper becomes the property of various angling clubs and is often inaccessible. However it is possible to walk to Winchester making use of the tow path of the long over-grown Itchen navigation canal.

Returning home retracing my same route results in a walk of a little under 7km or around 4 miles.