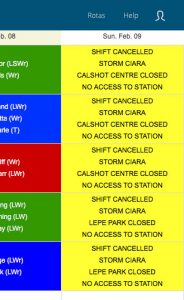 Portion of the “FindMyShift” screen showing the two stations closed.

An amber warning for wind on Sunday, 9th February, was issued ahead of storm Ciara, the second named storm of the year. On the Friday, Calshot Activities Centre issued a statement saying that: “Storm Ciara is due to arrive early on Sunday 9th February with gusts of up to 75+mph, heavy rain and high tides forecast. We have taken the decision to close the centre all day Sunday…”. Lepe Country Park similarly was to be closed for the day. As a result, neither Calshot Tower or Stone Point NCI stations were opened that day. As far as I know the first time Calshot has not been open due to weather. 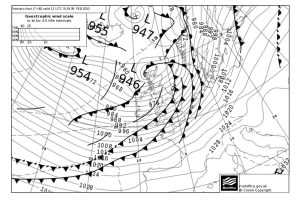 The forecast chart showed a deep low with tight isobars over the whole country. The frontal analysis suggested  development within, or merged into, the warm sector and a trailing occlusion in the cold sector. 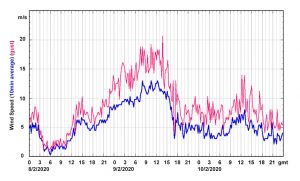 Winds at the jetty peaked around noon or shortly after on the 9th with a maximum averaged wind of 13m/s (25kts) and maximum gust of 20.6m/s (40kts). Maximum wind at Bramble Met Post was 47.6kts and maximum gust 57.6kts. 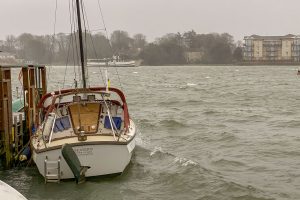 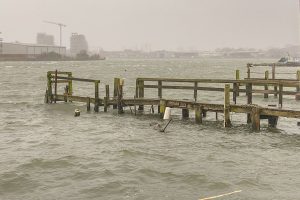 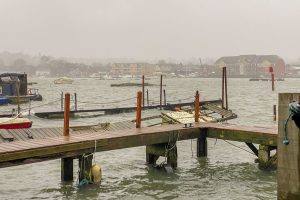 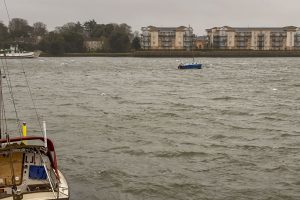 During the storm I noticed that my pontoon at the end of the jetty was at an odd angle and discovered that the upwind of the two scaffolding pipes, to which it is moored, appeared to be loose at the bottom end. I put some lashing at the top part but had to wait until the tide went out before I could inspect the bottom end of the pipe. It was indeed no longer fastened in place so I put some rope lashing on it as a temporary fix. 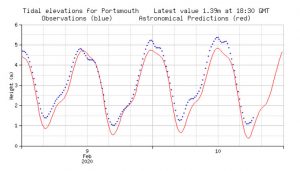 During the morning the Environment Agency issued a flood alert for Southampton Water on the Monday (10th Feb). A surge of 0.58m was forcast to increase the water level to 5.38m, almost the 5.4m level which is meant to trigger our flood plan. 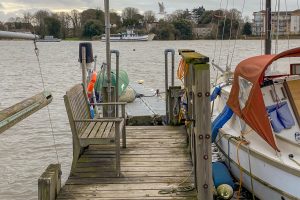 I went around the neighbours on the river side of the road to warn them and on the day Zoe and Jon checked the gates in the flood wall on the far side of the road. Thankfully, in the event, the tide only reached 5.3m on the Woolston tide gauge. Unlike for storm Brenan the water did not come out of the road drains so either someone has cleared the flap valve or the storm waves have washed it clear.