It’s Saturday. During the last week it emerged that, during the lockdown regulations, Dominic Cummings, the Prime Minister’s chief advisor, drove 200 miles with his family to a second home. While there they did a 60 mile round trip to a local beauty spot (coincidentally on his wife’s Birthday) to “test his eyesight for driving”. These flagrant breaches of the regulations were, according to Johnson and Cummings, fully allowable, which simply demonstrates what blatant liars they both are. It also undermines the governments authority in imposing anti-virus measures. 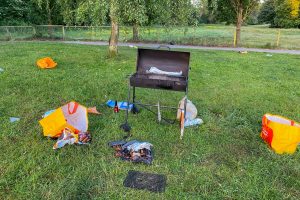 So then yesterday, untrustworthy Boris, during the daily Coronavirus press briefing, stated that the Government’s five tests had been met so it was OK to start easing lock down regulations from this coming Monday, 1st June. Obviously, no-one would jump the gun over the weekend despite forecast wall-to-wall sunshine; everyone (except maybe his friend Dominic) would wait until the following week.

In fact when I walked through the park earlier on Friday there were signs of a large barbecue gathering having already been going on the night before. There was lots of uneaten, even unopened food, and the barbecue itself still remained; the site had an hastily abandoned feel so maybe the police had been called and had intervened. 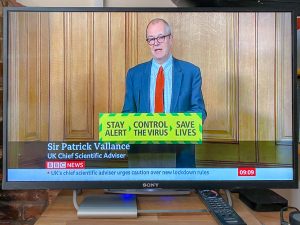 Anyway in the briefing, straight after Boris, the UK Chief Scientific Advisor, Sir Patrick Vallance, gave a much more measured assessment in which he urged caution with regard to the new lockdown rules. Then, on the 7pm BBC TV News channel, Prof John Edmunds (London School of Hygiene and Tropical Medicine and member of the Scientific Advisory Group, SAGE) implied that the decision to ease the lockdown was being taken due to social or economic factors rather than health since the prevalence of coronavirus in the UK population is still relatively high – and much higher than countries like Italy. The inference is that the Government is willing to tolerate the high rate of Covid-19 existing within the country. 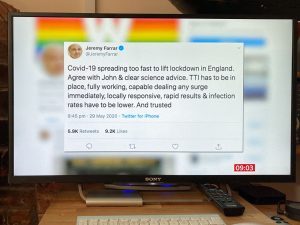 Apparently others similarly spoke out, in particular Jeremy Farmer (Director of the Wellcome Trust) tweeted “Covid-19 spreading too fast to lift lockdown in England. Agree with John (?Edmunds?) and clear scientific advice. TTI (Track, Trace and Isolate) has to be in place, fully working, capable dealing any surge immediately, locally responsive, rapid results and infection rates have to be lower. And trusted.”

These scientific assessments (rather than the picture painted by Boris) basically confirm what I’d concluded for myself. The Government is gambling on relaxing lockdown restrictions despite the UK still having an infection rate higher than the level at which other countries decided to relax lockdown. What evidence am I going on? I’ll set that out in the next post.