On Tuesday 23rd June the Prime Minister announced that, from Saturday 4th July, the “Social Distancing” rules would be relaxed allowing pubs and restaurants to open on a table service basis. The new rule was still to be 2m in general but “1m with mitigation” where 2m was not possible. The PM stressed the decrease in distance whereas the Chief Scientific advisor stressed the “2m where possible”. Nevertheless the headline on the BBC 6pm TV News which came immediately after was “Social Distancing reduced to 1m from 4th July” and the theme of the News Bulletin was to stress the contrast with Scotland and Wales who are keeping 2m. This made me think that a Government press announcement had, like the PM, emphasised the relaxation of the lockdown rather than the “2m where possible” advice of the Scientific Advisor. 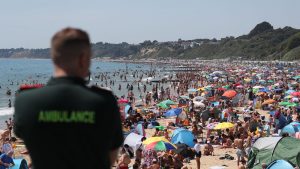 At the end of the week a couple of very hot days were forecast and, given that the “lockdown was being relaxed” on Thursday 25th people flocked to the coast. Since everywhere was still closed they all ended up on the beaches and Bournemouth was forced to declare a potential “Major Incident” due to packed beaches and jammed roads. On a previous “heat wave” incident  Lepe had become grid locked and places like Durdle Door were packed. 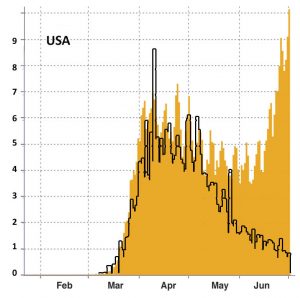 Number of new confirmed cases in the UK in thousands (black line) and in the USA (orange) where the USA data has been scaled as if the USA had the same population as the UK.

However, so far, although there have been these occasional incidents of over crowded beaches or protests in London where social distancing has broken down, they don’t seem to have resulted in a detectable upturn in infection, lets hope it stays that way! At present the only exception seems to be Leicester where some of the lockdown restrictions which had been relaxed are being reimposed due to an increasing infection rate.

That is certainly not true in the USA where a second wave of infections is evident. The states affected are mainly in the southern “sun belt” and the west coast and apparently the age group affected is generally younger than in the original infection outbrake. TV pictures from the States show people drinking in bars or walking the streets with no social distancing in evidence. Trump has consistently played down the severity of the virus and now it appears that the USA is seeing the result. 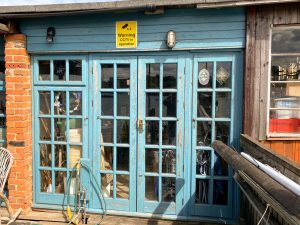 So what have i been doing? On 5th June I started stripping down the shed doors on the exposed workshop side where they open on the jetty. They were badly in need of doing but I’d put it off for the last year or two since I knew it would be a fiddle. Admittedly, I would have started earlier during the lockdown but at first I could not buy the Barn Paint that I wanted to use and I didn’t want to start until I had it. 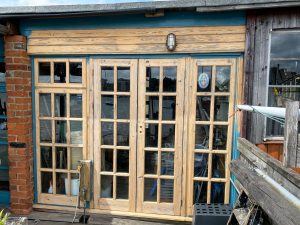 So now it’s July and I still haven’t finished stripping the doors; not that I’ve been spending long each day on them. One other problem is at the start of June I’d just finished a course of Efudix to treat the skin on my right forearm and wrist and it was pretty scabby – which is what happens if you have lots of sun damage from the past. That meant I was not keen of too much sun exposure and we’ve had lots of sunny days! So often I’ve been working on them in the early morning rather than doing my walk in the park – I can’t use noisy power tools at that early hour but I can do a lot of hand scraping… the doors are slowly getting there!

Otherwise I’ve started doing one or two buddy watches at Stone Point and a did do some trainee tutoring on the beach at Calshot too!