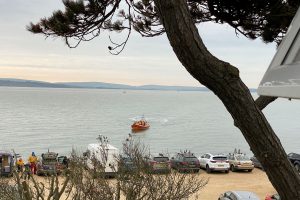 Calshot Lifeboat brings the Paddle Boarders back to Lepe

I was acting as “Buddy” at the Stone Point Coastwatch station on Sunday, 18th October 2020, as two paddle boarders set off from Lepe Beach around the time of high tide. At the time two members of the Lymington Coastguard Rescue Team (CRT) were talking to us and I remarked that, with the paddle boarders heading eastwards and the particularly large spring tide already flowing westwards, we would need to keep a watch on them. Once they were some distance off shore, south of Lepe Spit they were energetically paddling but making no progress against the current.

As we watched them they were in effect performing a “ferry glide” across the Solent to the Gurnard shore. With the ebb tide still strengthening, we were concerned that the paddle boarders would become tired, and possibly need assistance. We informed Solent Coastguard who tasked the RNLI Calshot Lifeboat who were in the midst of their routine Sunday training activities. 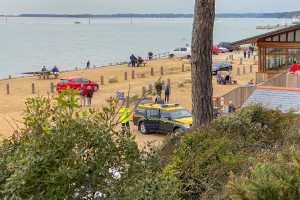 Meanwhile the paddle boarders had turned back towards Lepe but were now being swept rapidly westwards. Calshot Lifeboat called Stone Point NCI on channel 00 and we directed them to a position west of the East Lepe buoy.  Initially the paddle boarders said they were not in trouble and didn’t need assistance but the lifeboat crew pointed out that they would not be able to paddle back to Lepe without being swept well down to the west and they then accepted a ride back in the lifeboat. 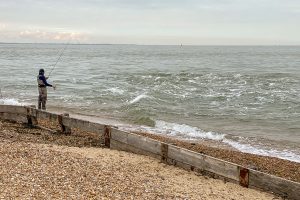 The current at Stansore Point

On arrival at Lepe Country Park they were met by the CRT who had gone on to Calshot, but came back to Lepe to check that the two paddle boarders were indeed fit and well.

They said that they were experienced paddle boarders, but they clearly had not allowed for the strength of the current.   Indeed, at the time of the incident, the current was rapidly swirling past Stansore Point and rushing over Lepe Spit. I wrote up a report on the incident in the NCI Calshot Tower “Blog”.