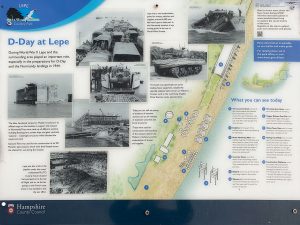 Information board for the D-Day remains

At about 1400 one of the Lepe Country Park rangers visited the NCI Stone Point station to say that while he’d been down at the “D-Day Remains” area looking for a lost dog he’d seen a wind-surfing board and sail seemingly left on the upper part of the beach. On his photo it looked like someone had left it there to collect later, but there was no “owner” around. I though I’d better go and have a look at it.

By the time I got to the board (about 1415) the sail had disappeared so I assumed that  the owner had taken the sail and would be coming back for the board. It made sense since there was a strong (force 5) southwest wind which would have made carrying both sail and board would have been difficult. I walked back to the old concrete tower base to get out of the wind in order to contact the station on UHF and say I was going to wait near the board for the owner to appear.

When I got back to the board there was a couple standing near it and the woman was on the phone saying that it had been moved and someone had taken the sail and that had it been the owner, then they would not have left the board. It turned out that she was talking to the Coastguard so I asked her to tell them that there was a Coastwatch watchkeeper from NCI Stone Point on site. 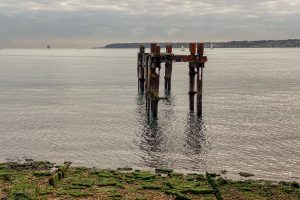 The couple left and the next thing I heard was the Lymington Coastguard Rescue Team calling NCI Calshot Tower on ch.65 about the board. I phoned the CG and told them the CRT should contact Stone Point. However the CG said that the CRT had located the owner who was safe and well. Soon after the board owner turned up for his board and said he was impressed that he’d only left it a short time and it had been reported!

After I got back to the station the CRT turned up and said I should have reported the board to the CG straight away since it might have washed up and then been moved up the beach! I disagreed but didn’t say anything. They did say that the woman who had reported it was an off-duty Police woman. Clearly she had never tried carrying a windsurfer board and sail any distance against a strong wind!

I did wonder if I should have gone to the lower car park looking for the owner before going to the board. But the owner might equally have parked in the upper car park if he had been intending to wind surf to the east of the spit. It all seemed much to do about nothing but, since the CRT had been involved, we had to write it up as an incident.