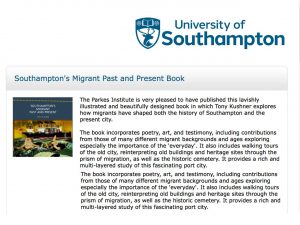 Searching the University web site I’d stumbled upon an interesting book: “Southampton’s Migrant Past and Present” and, having bought a copy, I decided to do the walk around Southampton old town which is described within it. Not wanting to actually carry the book (since I was going to be walking from St Denys and back as well) I photographed the relevant pages using my iphone and used that to guide me.

Perhaps the most striking monument which I had not known about was the “D-Day wall” were American servicemen waiting to embark for D-Day had scratched their names and origins into the brickwork. There’s even a miniature wall presumably built to preserve some of the original bricks which otherwise would have been lost.

By now the scratched names are hard to make out. This photo is an enlargement of the top part of the small wall which hopefully allows some of the names to be read (click on it for full screen view)…

Here’s some more views of parts of the wall (although I’ve purposely left out one that shows where it is situated, you have to buy the book to find out!).

At the “Platform” (down near Town Quay) there is a display board showing a map by Thomas Milne which it says was featured in William Faden’s new map of Hampshire, published in 1791. I’ve tried to match a modern map to see how the two relate. In evolutionary terms 1791 was no time at all ago and yet the population has grown exponentially since those days; as a species we really are out of control!

Nearby, at the south end of the High Street I came across two plaques set in the pavement featuring the Oceanography Centre. I think they are part of a “QE2 walk” or something similar. I’d forgotten about their existence and now am puzzled at the one mentioning the National Oceanography Centre and bearing the date 1995. At that time it was called the “Southampton Oceanography Centre”. Did they change the plaque when they changed the name?! Paolo Cipollini was in the Satellite Oceanography Group which was part of my Research Division. 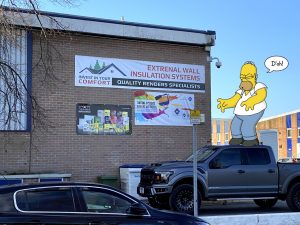 By the time I’d meandered around the various sites mentioned in the book I must admit I was getting  tired so I made my way back via St Mary’s and was amused to see this sign.

I wonder what they thought when they realised the mistake?