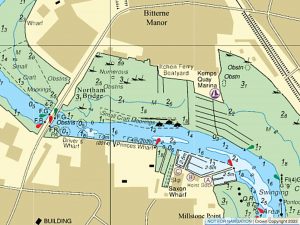 Walking to Chessel Bay I go over Northam Bridge. Downstream various assemblages of “river gypsy” boats are moored in the area between the bridge and Kemps Quay Marina. The people living out on the river use various craft as tenders, with the embankment on the northern end of Northam Bridge as a landing place. There are also a number of boats and wrecks of boats, tied up there.

One of the older, more picturesque wrecks is an old, wooden, carvel built yacht hull. During one walk, on 26th January 2022, I climbed down to the beach and took some photos of that and some of the other nearby boats.

And some of the other boats on that day:

On 24th February, following storm Eunice on the 18th, it looked like more boats had been driven onto the embankment including one group of boats which now had a line to the old wooded hull, hardly a good mooring point!

Although most of the boats on the embankment look wrecked, it also looks as if people might be living in some them! Out on the river they normally have perhaps three or more boats moored alongside each other, presumably to give more room, but also, perhaps, as a safety measure in case one sinks.