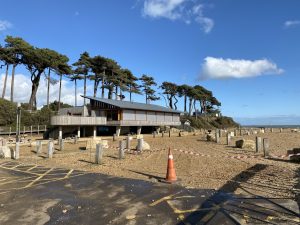 After a visit to NCI Hengistbury Head on the 22nd February I decided to stop off at Lepe Country park to look at the damage due to storm Eunice (18th February). I approached via the Exbury Road and found that it was closed near the Coastguard cottages. Apparently the bridge over the Blackwater River outlet had had to have the bridge abutments reinforced and the highways people were still clearing the road of sand and debris. I parked at the Exbury side and walked to the park. In fact the road was reopened as I was on my way back to the car.

The Country Park  had hoped to open that morning but they had had problems with the Park power supply which were to result in a few more days’ closure. The beach car park was still a mess but the upper part of the park had faired better than I feared with few, if any, trees down.

Finally the Park partially reopened on the morning of Friday 25th February and I parked in the upper car park and walked along the beach to see how much damage there was to the cliff and the area at Stansore Point and beyond.  The cliff had obviously suffered erosion with a number of bushes fallen to the beach.  A power cable coming out of the cliff had been fenced off and covered in sandbags so presumably it was a live one taking electricity to the Isle of Wight.

Lepe Spit appeared much wider than before, the shingle was looser under foot, and I don’t think that there was such a steep drop-off on the western side. There was also (I think) a more pronounced “island” to the east side of the spit. Going towards Stansore Point the old concrete road to the D-Day area had been exposed where before it was soft sand. In some places sand and shingle had been washed across the track and into the Cadland Estate fields. The brick walls at the D-Day remains looked very clean and there had been a lot of under-cutting of the concrete structures suggesting that the beach level had been significantly lowered.

I have not edited the photos but made them available as two galleries as a record of what the beach was like.