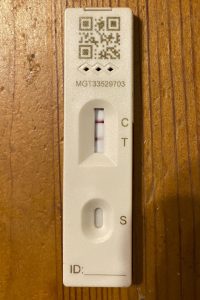 I was on watch at NCI Stone Point on Friday and Saturday 25th/26th March, the latter shift being to fill in slot needing a qualified watchkeeper. As usual, on both days I had done a negative Lateral Flow Test (LFT) beforehand. The temporary Station unit at Stone Point is small; we do keep the door and windows open, but I don’t like wearing a mask because my glasses always steam up!

I was feeling fine on those days but on the Sunday I started to feel as if I had a cold developing.  This was a potential nuisance because I had been contacted by the BBC producer for the World Weather TV programme and agreed to take part in filming at the Needles on Thursday 31st March. The reason was two posts I’d done on the NCI Calshot blog on why “record” wind gusts have been reported from the Needles and the problems of anemometer exposure when measuring the wind.   I didn’t want to be interviewed for TV while suffering from a bad cold!

On Monday morning I felt worse with a dry cough and possible temperature, and was now worried I might have covid-19. Having heard that LFT’s exhibit 15% false negative outcomes, when the first was negative I did another but that too was negative. As usual, the mercury in my medical thermometer failed to reach the “normal” marking no matter how long I left it under my toungue. So I decided it really was just a cold and concentrated on trying to get rid of it before Thursday.

However on Tuesday morning (29th March) I was still feeling rough so with the BBC appointment in mind I did another LFT and this one was positive! After emailing the watchkeepers I’d had contact with at the weekend (none of whom seem to have been infected),  the rest of the day was spent unsuccessfully trying to get a stand-in for the BBC programme.

It is now Saturday 2nd April and I’ve still got a cough and the occasional sneezing bout, although both seem less frequent than previous days. I have not left home since testing positive and have hardly been out of the house either since we have had a spell of cold weather even including some snow flurries.

Footnote: The cough persisted and I continued to stay in the house to try to shake it off, and also in the hope of giving myself the best chance of not developing long-Covid or some other form of post-viral fatigue symptom. It wasn’t until Thursday 14th April that, with a bout of “cabin fever”, I did an LFT to make sure I was not infectious and then went out to Lepe to look at the new NCI Stone Point Station unit. I did another LFT before going on watch on Saturday 16th April, the first since I tested covid-19 positive.  I felt OK while on watch and doing a beach Patrol but when I got home that evening my legs felt a bit jelly like! I’m writing this on the 22nd April and I still don’t feel to have a normal amount of energy.