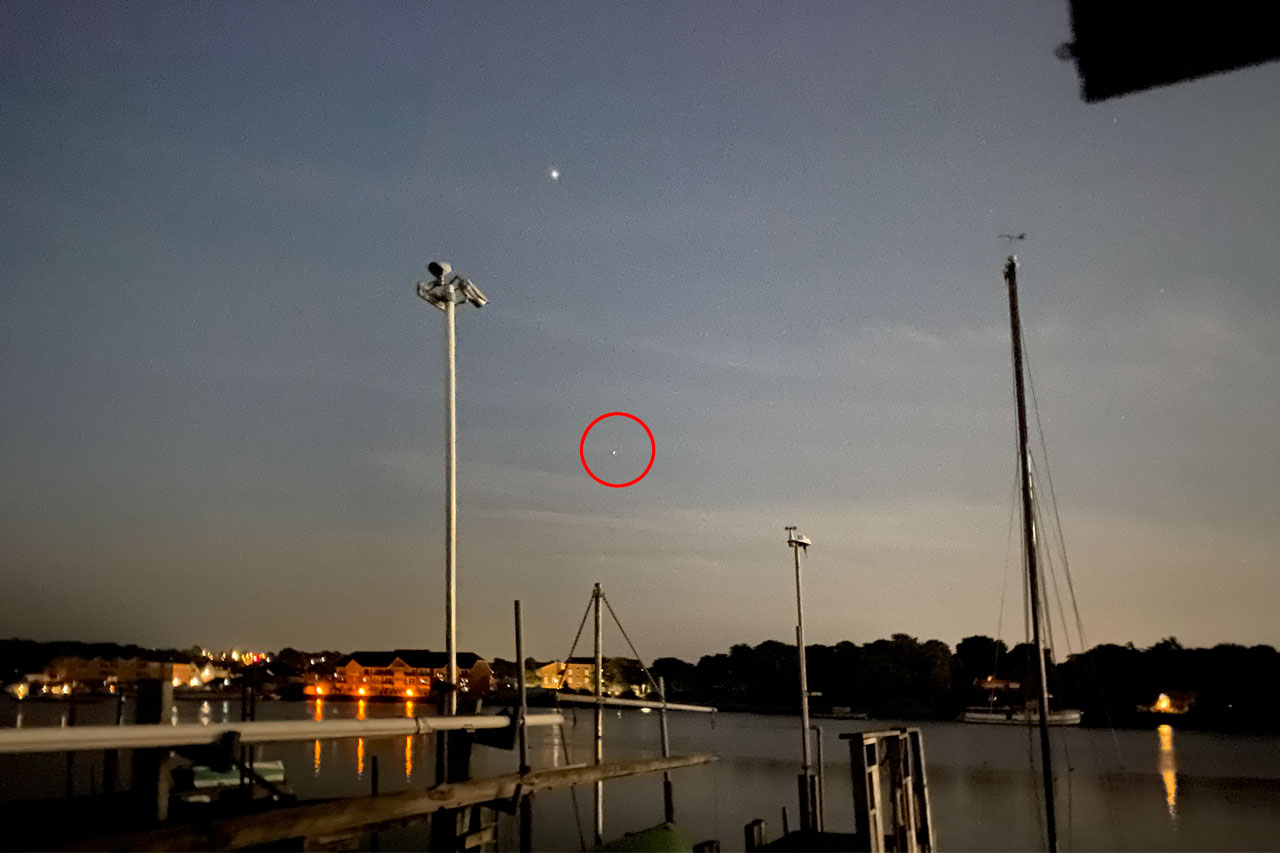 Today I saw the International Space Station (ISS)! I had woken even earlier than usual and decided to get up in order to open up lots of windows and cool down the house – we are having hot weather. However first I needed my morning cup of tea and went out on to the jetty staging to drink it. Looking up at the sky there was a bright planet and, somewhat lower, a less bright light making its way across the sky. Just before it disappeared I took the photo.

I guessed it was the ISS but checked on the web to make sure. It said that in Southampton it should be visible from 0308 to 0315 BST travelling from 10° above W to 10° above SE and having a maximum elevation from the horizon of  50°.  That fits with what I saw, the photo was taken at 0314 BST.

OK, the photo is not very spectacular, but I found it a surprisingly eerie feeling to see it, way up there with people inside.

However, I have doubts about the usefulness of the ISS. From a science point of view, unmanned small satellites offer far better value. But I guess the ISS has helped International collaboration over the years which must have a value?

At one time I was involved with planning for satellite missions.  Apparently, the proposal for an ISS was a budget item that NASA included each year confident that it would be slashed from the program as far too expensive. Thus cost cutting could take place leaving all the less expensive projects, which NASA really wanted, preserved. Unfortunately, one year President Reagan decided that funding the ISS would be a grand gesture which posterity would remember, so it went ahead, much to NASA’s horror.  At least, that was what I was told by a trustworthy authority.

Around that time I became a member of the UK National Space Centre “Columbus Panel”. Some accountant in the US administration had decided that, instead of launching a continual series of “expendable” earth observation satellites, it would be cost effective to launch large “Polar Platforms” which would stay in orbit indefinitely. The instruments would be serviced and replaced by astronauts performing space walks from the ISS, thus also helping financially to justify the latter. The Columbus Panel was supposed to recommend how the UK could contribute to, and benefit from, this ISS based Polar Platform system.

I think we only met once since, as proposed, the system was unworkable! Earth observation satellites have to be in a relatively high altitude, high inclination near-polar orbit in order to scan the whole earth as it turns beneath them. The ISS is in a lower altitude, low inclination orbit so that the astronauts don’t get zapped by too many cosmic rays, as would happen if they went over the poles. It would not be possible to bring the Polar Platforms into the ISS orbit, service them, and then send them back into their original orbits; that would take far too much rocket power.

So much for space science; I guess it was soon after that I turned my efforts to trying to preserve the merchant ship based WMO Voluntary Observing System which was in danger from the mistaken belief that satellites could do everything!