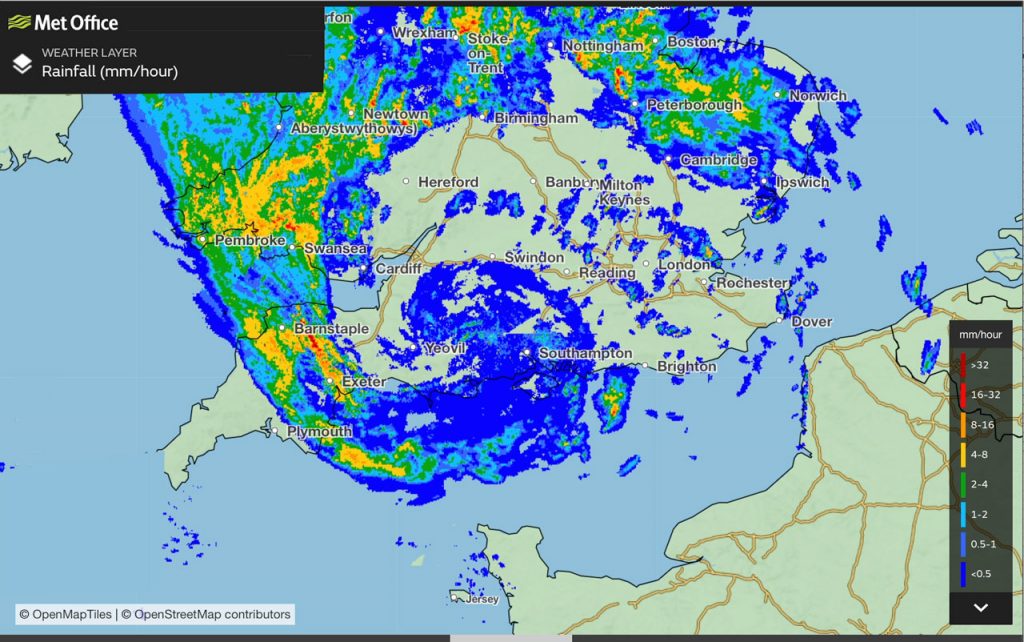 This is a longer version of a post I wrote for the Calshot “Blog”….

Around lunch time on Monday 31st October (Halloween), the Met Office issued a warning for strong winds overnight along the south coast, we shared it on the NCI Calshot Facebook page. At 23:45 that night the NCI Stone Point weather station reported a gust of 55 knots. Twenty-seven minutes later the electricity supply failed in the Lepe area, the last wind report from Stone point was 49.5 knots.

Waking up early on Monday morning, and seeing that there were no data from Stone Point, I was worried that the anemometer mast may have been blown down.  I had a Waitrose delivery scheduled for breakfast time so I drove out early reaching Lepe at about 05:00. The  roads around Lepe were covered in debris from the trees and some larger branches had come down. 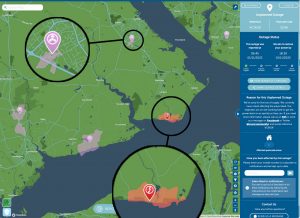 The SSEN “powertrack map”. Purple areas mean they are trying to fix the power cut, red means they haven’t got there yet!

At the NCI Stone Point station I realised there was a power cut, something which I should have been able to work out without going to Lepe, had I thought about it a bit harder!

On the news that morning there were reports of fallen trees in the south.  Checking the status of the electricity outage on at the SSEN “Powertrack” website it seemed clear that Lepe was not a priority area. The engineering team did not get to the area until about 14:30 and power was not restored until around 20:00 Monday evening.  NCI Stone Point opened that day with the radios working on emergency battery power.

Were the high winds caused by a “sting jet”? 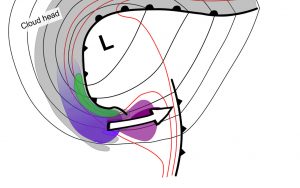 Following the “Great Storm” of 1987 it was realised that the worst damage had been caused by a limited region of exceptionally strong surface winds which the meteorologists christened a “sting jet” because the storm’s cloud shape resembled that of a scorpions tail.  Since the storm occurred during the night, satellite visible images which might have shown cloud formation of the actual “sting” were not available. However the radar derived rainfall distribution (see top image) showed that Lepe situated in the appropriate area of the “scorpions tail”. 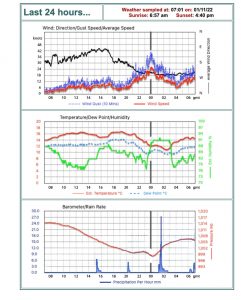 Data from my jetty on the River Itchen in Southampton. The time of maximum wind is marked with a grey line. (click plot to enlarge)

The met data from my jetty showed that in Southampton the maximum winds had occurred at around midnight, well before the rainfall marking the passage of the occluded front at 01:30 on Monday morning. During Halloween evening the air temperature dropped from around 16°C at 20:20/31 to a minimum of 10.8°C at 02:30/01. Despite the cooling, the relative humidity also decreased, however it jumped to near saturation when the wind peak occurred.

I don’t know whether the met data is consistent with there being a “sting jet” or whether the strong winds were simply what might be expected in that region close to a bent back occlusion.  To preserve a record of the event I’ve used the data from the Met Office application ( https://www.metoffice.gov.uk/weather/maps-and-charts/rainfall-radar-forecast-map ) to create a short video (I hope they don’t mind!).