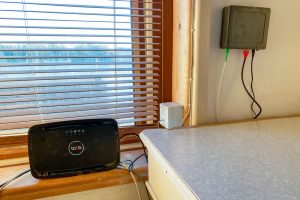 I finally got fed up with how much I am paying BT for broadband and decided that, with my BT contract ending at the start of January, I would take up the offer from local firm “toob” to install a full fibre broadband connection for free, and a 18 month contract at £25 per month, just under half the BT cost. That’s a saving of just over £300 per year!  Admittedly the price differential would be much less if I hadn’t also decided to give up a landline phone connection and rely on my mobile phone.  However I only use the landline for incoming calls since it is on a pay-as-you-go plan, and the mobile is much cheaper.

Of course you have to phone BT to cancel their service, and when I tried to do that in November it turned out you can’t specify an end date. You have to tell them exactly 30 days before you want it to end.  And of course the person you call offers you special deals which only seem to appear when you threaten to leave.  Thank goodness I am leaving.  I phoned them again on the 4th December to tell them to stop in January but I still have not received the promised confirming email (it’s now the 8th) so I have cancelled the direct debit to make sure they don’t claim I’ve started another contract, or charge me beyond the current paid up period. 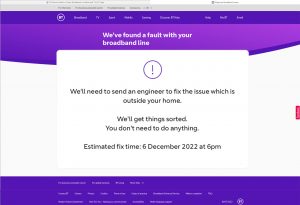 BT tells me on 1st December that they will fix the fault by the 6th December!

By coincidence, on the 1st December BT managed to screw up big time!  BT internet service for the local area, which has normally been reliable, failed that morning. All broadband services which use Openreach infrastructure failed, which apparently only left Virgin and toob working! The BT serviceweb site said that they hoped to fix things by 13:00 that day.  After that time the internet was still down but the BT web site said there were now no problems. I ran a diagnostic test which said I had a problem and they hoped to fix it by 6th December – 5 days time.  However I checked with Zoe and her internet was still down too, so I then tried reporting a fault by phone. The helpful woman who replied said there was a fault outside of my house and she would arrange for an engineer the next day how may have to have access to my house.  In the meantime she would send me an EE mini-hub.

It seemed each part of BT did not know what the other parts were doing or at least Openreach did not tell BT what was going on. I had visions of having toob installers and a BT engineer turning up at the same time.  In the end the area internet was fixed at around 01:15 on 2nd December, at least going by my Weatherlink managing to make contact.  The BT engineer was cancelled, and a redundant EE mini-hub turned up.

The toob installers were very helpful and ran the fibre connection from the same pole as my phone connection, then led it round to the back of the house so it could go in exactly the same place as my BT router. I now have a further box inside the house which converts the fibre signal into an ethernet signal to go to the router. So far, it all seems to work!