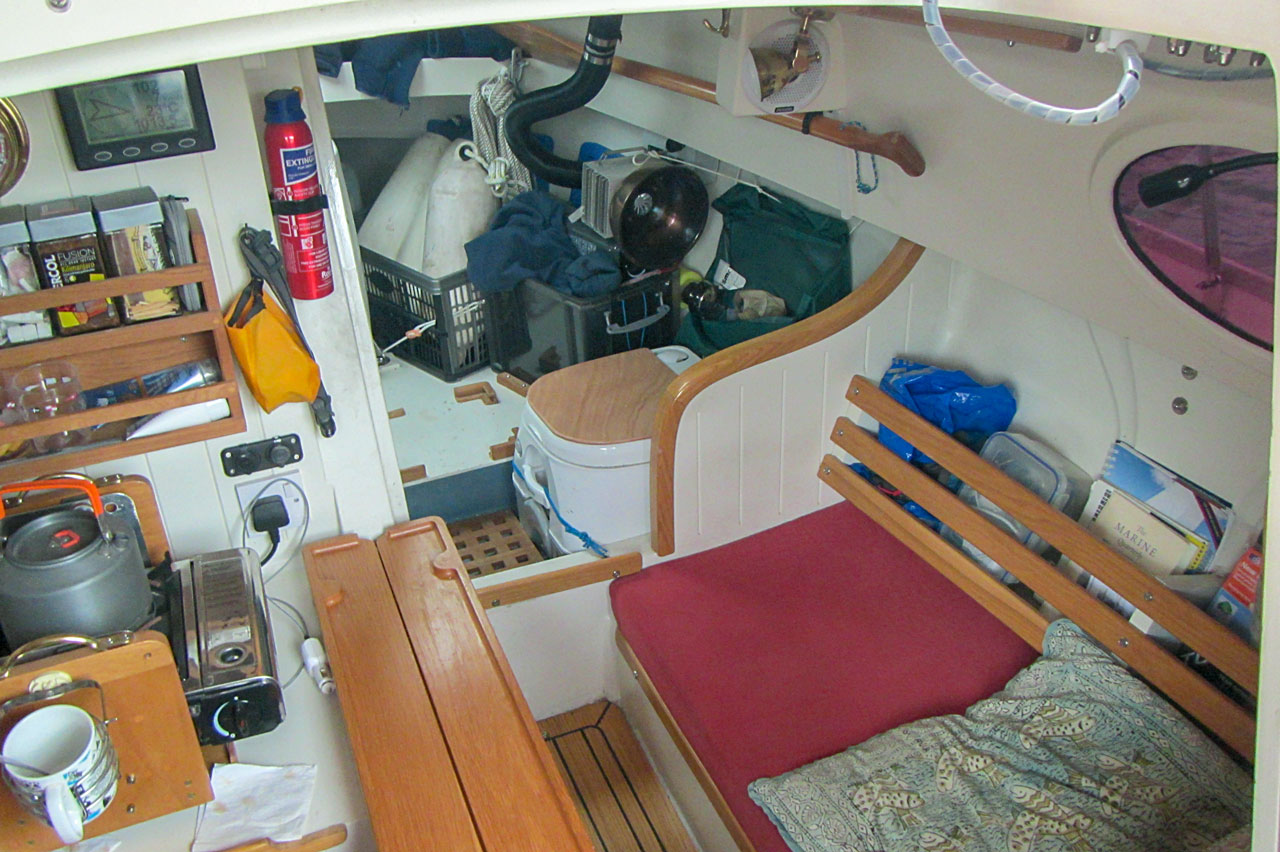 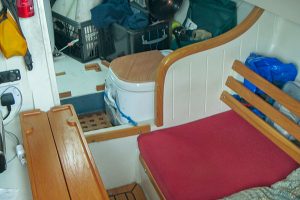 I finally repaired the toilet seat lid… it’s needed doing for two or three years but somehow I never got round to it! The toilet sits in the starboard side one of what were originally designed to be two storage lockers under the forepeak v-berth. It’s main use is as a place to sit while getting things in or out of the fridge – which sits in the opposite port side “locker” space. Some time ago the lid started to crack and it’s gradually got worse. I’ve repaired it using a piece of marine ply stuck onto it with CT1 adhesive. From an aesthetic point of view, the ply also helps, slightly, to tone down the whiteness of the plastic toilet! 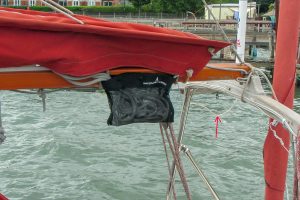 Bag for the reefing lines

I’m also experimenting with a bag to hold the reefing lines at the leach. Whether this proves a good idea remains to be seen. I fastened the bag quite far aft so it is over the outboard well rather than being where I stand. However I’m a bit worried that it might catch in the upper mainsheet block and I may use a short strop on the latter to keep the two further apart*. When I looked at the photo of the bag I realised that the cable (arrowed) to the Echomax radar transducer was no longer fastened to the antenna mount. Hadn’t noticed it before, but now fixed – photos can be useful! 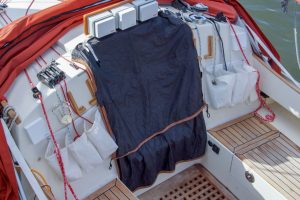 The companionway curtain when first installed

The bag originally came with the companionway curtain which was made by a Swedish firm, Waterline designs. The curtain has proved very useful in keeping rain out of the cabin when I’m sailing with the spray-hood down and the wash-boards out. I also use it sometimes in winter when I’m sleeping onboard. It cuts down the draft through the gap between the hatch cover and the top washboard. I realise that Matt intended the gap to provide ventilation, but at the jetty the mains-powered dehumidifier prevents condensation in the cabin so a little less through flow is not a problem. Nor does it restrict air flow to the extent that the digital display on the alarm shows any CO in the cabin from the butane powered heater, so presumably the latter still gets enough air supply for the exhaust gases to vent safely outside.

Finally, I shortened each of the plastic stiffeners along the top of the sail bag by about 2″ (5cm). They tended to stick out at the mast end and the velcro covered tabs which held them in were looking very frayed. I kept thinking I should extend the tabs but finally the penny fell and I realised it would be easier just to shorten the plastic! Doah!

Seatern Diaries > 2018 > About Seatern > 15th August: Some nagging jobs
Because we use Google Maps and other services, using our site may place cookies on your computer. If you continue to use this site we will assume that you are happy with it.Ok