After getting back from the mornings walk, I spent the afternoon of the 19th emptying (more or less) Seatern’s petrol tank into the car and refilling it with fresh fuel. I used Shell V-1 so Seatern should motor like a formula-1 car in future! Whether this was necessary, I don’t know. the outboard “Dai” has started well each time I’ve tried it at the jetty, and although I used a water excluding funnel when transferring into the car, there was no obvious sign of any water. The inline filter in the supply line to the outboard likewise shows no water capture. 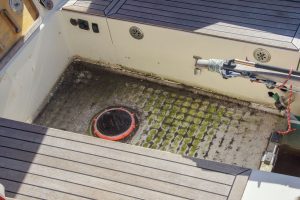 I also took advantage of the afternoon high tide to remove Dai from Seatern. Once I’d removed the lower half of the locker catch, the binocular box, a set of chart plotter holders, and disconnected the filling/emptying pipe for the water ballast, I was able to lift the cockpit floor grating. Underneath was, as last time, a mix of dirt, some green growth and,surprisingly, what seems like human hair. I didn’t think I had that much to loose! 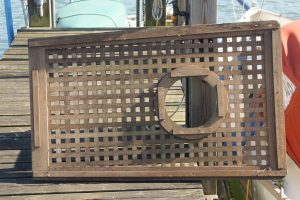 The underside of the grating before cleaning.

At about 12kg the grating is a significant extra weight added to Seatern. I had it made by Howells in Poole before Seatern was delivered because I didn’t want the ballast tank hatch standing proud. However it’s great advantage has proved to be the non-slip, self draining surface it provides. When boarding Seatern in the dark on an icy winters night the teak grating is a definite boon.

Although dirty, I was pleased to see that the underside of the grating showed no deterioration – even the sacrificial strips that support the main framework were totally sound. 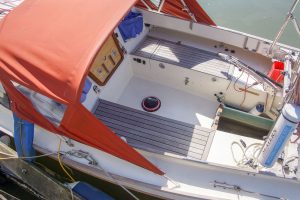 On the 20th (Friday) I scrubbed down the cockpit floor and, once dry, applied a sparing coating of boracol. Obviously it would not soak in and I didn’t want to be adding a biocide to the river. However I thought it would suppress any mould or algal spores I might have missed. 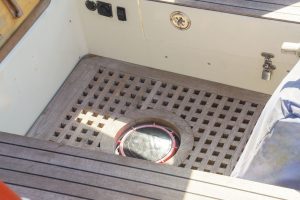 I cleaned and then sprayed the grating with boracol to ensure the sides of the holes were treated. As with all the woodwork, it looks better already, and should improve over the next week or so when any remaining mould has died and the woodwork washed down.

I used the afternoon tide to get Dai back into place.  I still need to replace the compass box and chart plotter bracket, but I found I had run out of white Marine Sealant.