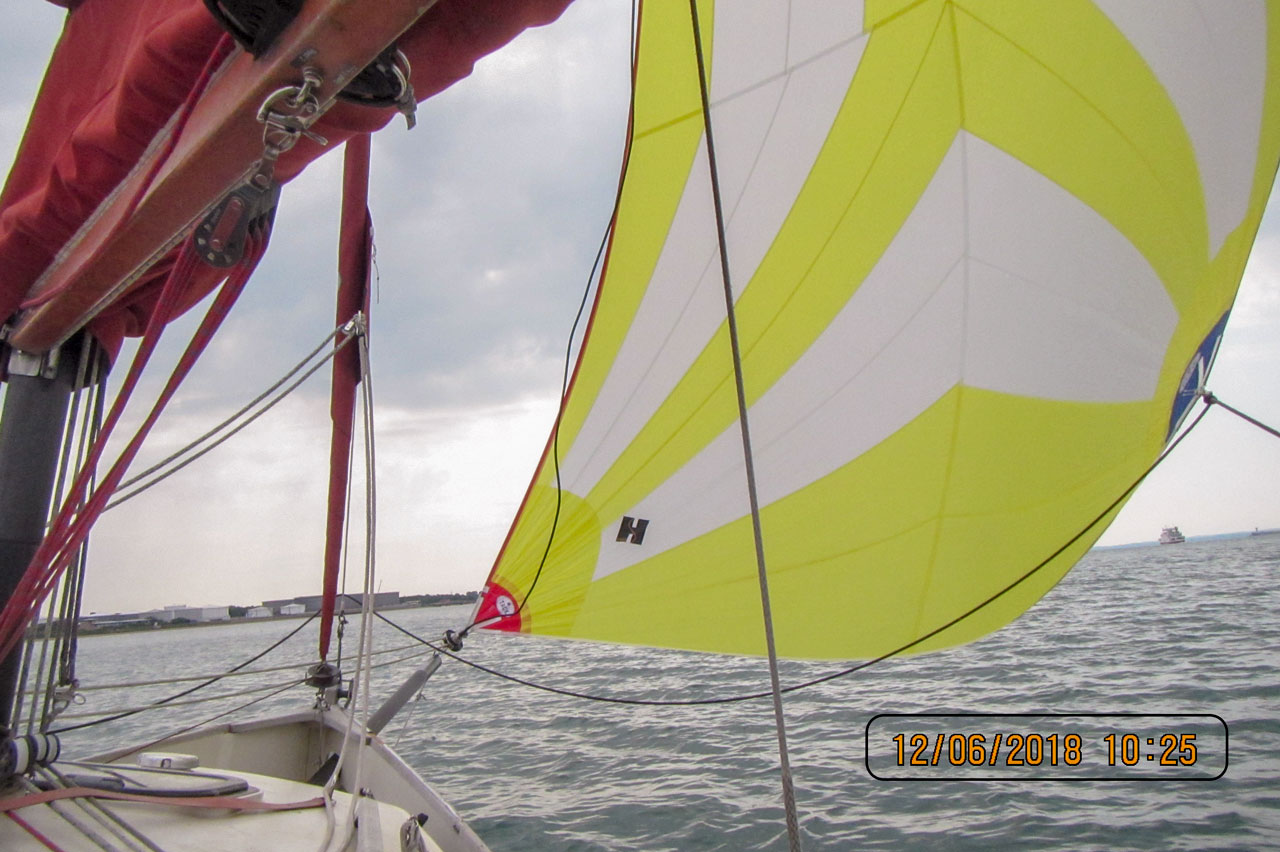 There’s been some good sailing weather but during the last week in May I got a cold/throat infection and then last week Mark was working on the roof so I stayed around the house. In any case I still had a cough which has lingered even to now. The weathers about to change from anticyclonic to more mobile westerly so I decided I really had to get Seatern away from the jetty!

Having got every thing ready I pulled Seatern out and moored to the side of the pontoon as soon as she was afloat. The water is a bit deeper there and, steering with the outboard rather than the rudder, I managed to get away by 0843. Having passed under Northam Bridge the flooding tide and light wind allowed Seatern to keep steerage at about 2 kts so I had the mast up and the boom attached before reaching Kemps. Given that the wind would be from astern, I made a spur of the moment decision to sail down the river and turned towards Chessel Bay to hoist the main. In the rush I forgot to free the reefing lines, then I found the forestay was wrapped around the furled jib. However by the time I was off Shamrock I had main and jib set and I managed to set the mizzen, and start setting up the asymmetric before the Itchen Bridge. 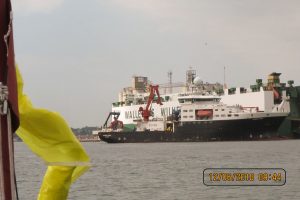 The RRS James Cook passing a docked car transporter as I hoist the spinnaker.

The research ship RRS James Cook was inbound to Empress Dock and the Oceanography Centre reminding me of my previous life as I hoisted the asymmetric on its new top-down furler. Bearing in mind the weather forecast, I had planned to go up past the western docks so I’d return with the current if the wind dropped. However a broad reach towards Hamble was too tempting and I turned southeast over Weston Shelf. The asymmetric unfurled beautifully and Seatern surged ahead.

The wind speed was very variable but in the “gusts”, which weren’t that strong, Seatern was doing well over 5 kts. Admittedly there was probably a 0.5 kt tide or more helping, but it still seemed a good speed for the amount of wind and also given that the apparent wind was a bit far forward for the best use of the asymmetric.

Nearing Hamble Spit I saw a familiar looking motor vessel coming out of the Hamble and a squint through the binoculars confirmed it was Seafin (see October 2017). Soon after I heard Fred report to VTS over the VHF. The water was now beginning to shallow. Although I had time in hand, given the weather forecast I was worried the wind would drop and I’d end up having to motor back against the ebb. At 1045 I furled the asymmetric and, with the jib still furled, gybed the main to start back. 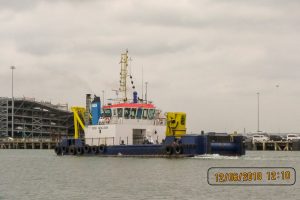 The wind was now a close reach, approaching a beat, so I unfurled the jib. On the way back I had a quick, early lunch and stowed the asymmetric. A couple of times Seatern heeled in gusts but she headed up and the tiller pilot got her back on track. Off Weston Shore I started Dai and furled the sails. The dredger UKD Sealion was working near the Woolston pier and a large Sunseeker came down river.

The first phase of the Vosper-Thorneycroft site development seems to be more or less complete. The multi-storey car park has a good view of the river and Ocean Village at present, but I expect they will build something in front of it! I got the mast down very early, soon after the Itchen Bridge, which proved good since there were various craft further up the river. Got back to the jetty at 1259, at the second attempt, having been blown off the first time.