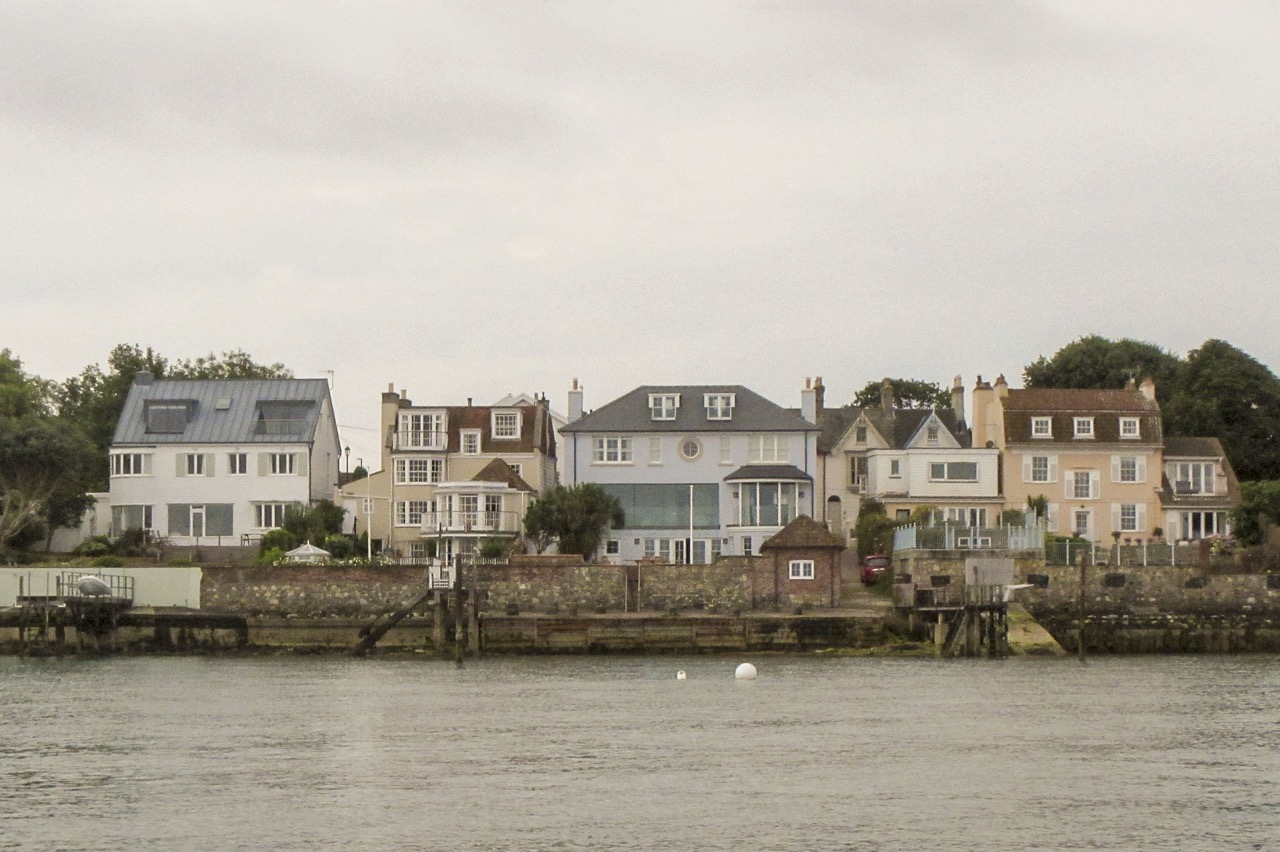 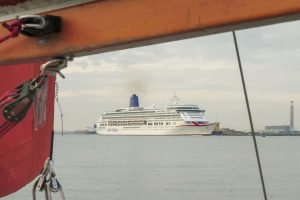 Too early a tide to catch it coming in but the nights have been warm and I woke early – about 3am – and managed to leave the jetty by 0430. There was very little wind so I continued to motor down Southampton water while I had breakfast. At 0530 I started to get under sail with main, jib, and mizzen. The Aurora and an outgoing container ship were executing a “Fawley pass” – taking advantage of the wider channel near the Fawley Deep buoy. 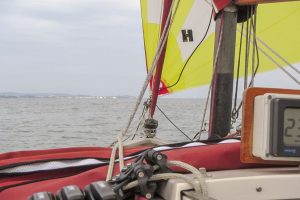 While sailing up Southampton water I rigged the asymmetric in anticipation of being freed off once in the Solent. There seemed no way it would set OK without me having tangled one of the sheets. However, when the time came (about 0655) it set like magic! The wind was a bit too far aft for the asymmetric to really pull but with the ebb flowing, Seatern was managing 4 to 6 kts and the chart-plotter was forecasting arrival at 0900 at Hurst – just after the turn of the tide. Confident that the wind was light, between 0710 – 0730 I emptied the ballast tanks to make the most of the wind. 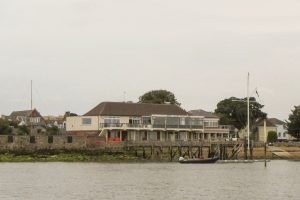 At 0820 there was a very clear “mayday” from one of the local ships. It turned out that a crew member had gone onto the bridge and for some reason grabbed the radio and started sending out a “protest” mayday. Last I heard she was back in Southampton with the police in attendance!

As time progressed the wind died away and by 0833 I hadn’t quite reached Yarmouth, the tide had turned, and Seatern was struggling to make headway. A warship was fast approaching with a large bow wave. The Belgian frigate Leopold 1 which fortunately slowed down – was that really to come past Seatern? Rather than just sit there until we were swept back eastwards, I furled the asymmetric and started my outboard “Dai”. 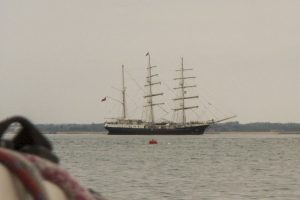 I then proceeded to motor sail close along the Yarmouth shore, something I’d not done before. East of the ferry terminal there are expensive properties and also the Royal Solent Yacht Club and the George Hotel. Moored in two trots are the Yarmouth One Designs, which date back to 1910. As I passed the pier which is being repaired the Jubilee Trust square rigger “Tenacious” came past under motor. 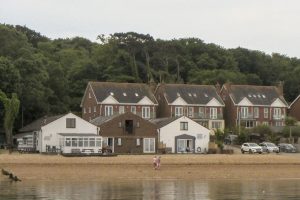 West of the terminal there is the harbour wall  and then a bit of “beach” and coastline (fronting marshland which opens onto the harbour).  Off this part used to be a good place to anchor but now there are lines of visitor moorings which cost money to use!  Next is Norton Grange Coastal Village – looking like a spa from the water but apparently a chalet holiday resort. It’s then wooded until Sconce Point where there is an interesting looking beach cafe and/or restaurant in some old boat houses. On the Point there’s another cafe within Fort Victoria.

From there on it’s wooded until Fort Albert. I had the centreboard more or less raised but I ventured too close in and the rudder must have hit a rock or something since it jumped up accompanied by the loud crack of the down-haul cleat giving way as it’s designed to do. Inspection since the trip doesn’t show any damage! I motored just past Fort Albert and had a brief, somewhat distant look at Colwell Bay before unfurling the jib, raising Dai (with my thanks), and turning Seatern back eastward ay almost exactly 10am. 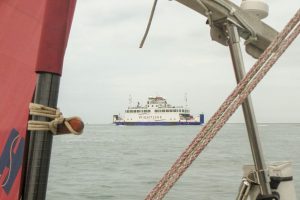 Seatern went past Hurst close hauled at nearly 7 kt. There were some strong gusts and having dodged a Wightlink ferry at Yarmouth, at 1025 I started refilling the ballast tanks. Almost as soon as I had done that the wind dropped away again! The first tack was taking me towards Sowley Barrier and the next tack took me past Newtown River entrance, although Seatern was pointed more west – it’s good to be tacking with the current! On the next tack the wind started to increase and I was glad the ballast tanks were not empty! Seatern was now over-canvassed and, after going about at Lepe Middle I furled the mizzen. Initially Seatern was headed for Eqypt Point but she became progressively headed and now heading towards Gurnard, I decided to tack. 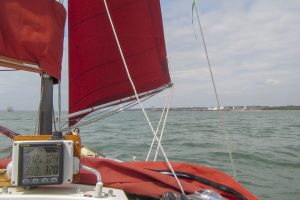 The new wind direction allowed Seatern to stay north of the shipping channel and maintain around 5 kt over the ground until Castle Point where I let a RedJet go past before crossing to east of the greens.It was a run back up Southampton Water and I managed to stay on starboard with the jib goose-winged. For the first time ever I actually used my home made whisker-pole. It worked well! 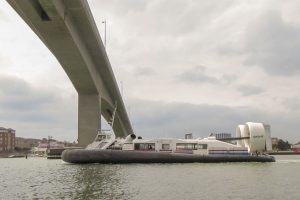 I furled sails at 1412 off Weston and, going under Itchen Bridge, was met by a Hovercraft outbound. It’s hard to know what course they are on since they don’t go where they are pointed! Howevr this one forced me across to the Woolston side to the extent I had to cross close behind it to stay near the channel. The wake from its propellers nearly blew my hat off! Even under bare poles Seatern heeled  and I was glad I was not sailing.

I was back to the jetty at 1515 and managed to come alongside smoothly on the first attempt, wish it was always like that! [43.1nm]