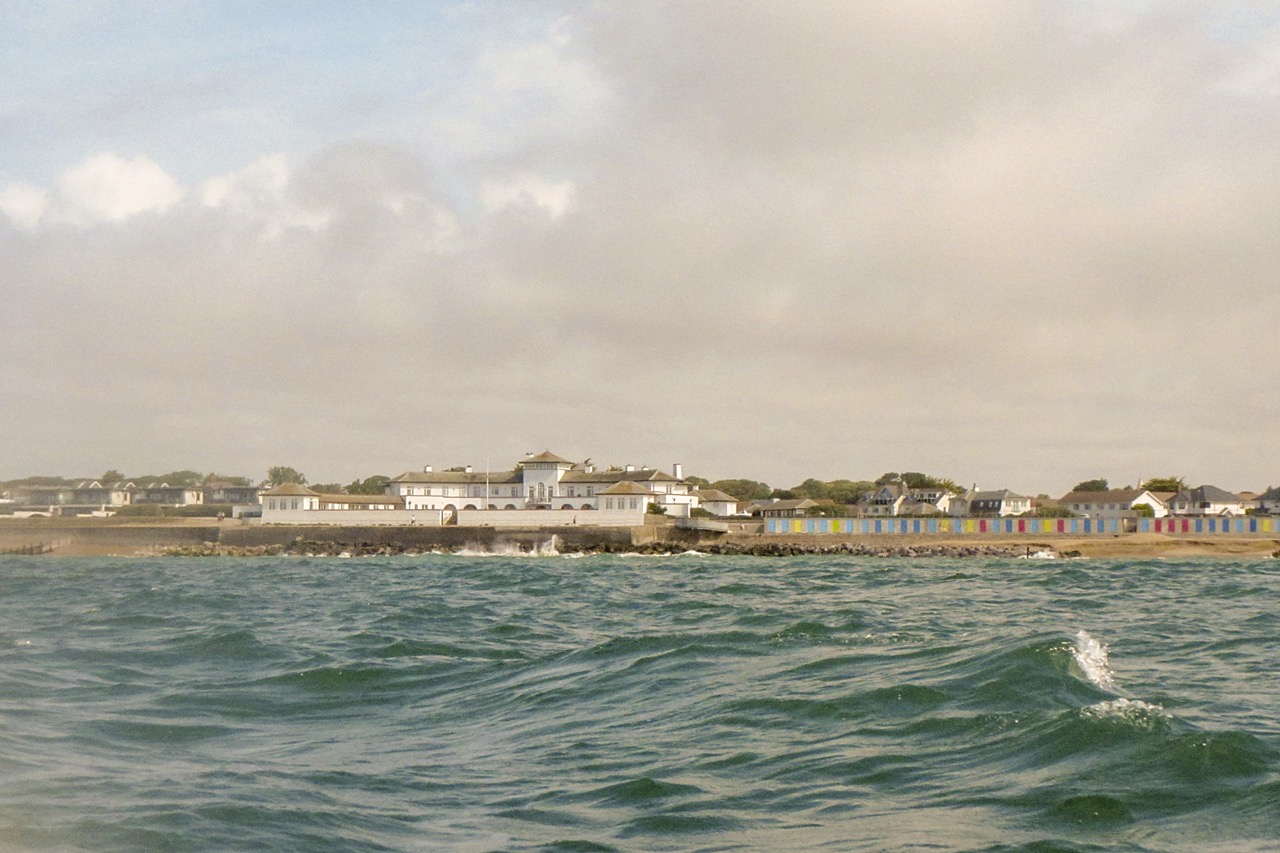 Friday 26th July: We have been having some hot weather with temperatures in the 30’s and nighttime temperatures in the 20’s. Not quite so hot last night and a cold front is promised for the weekend, but despite a clear sky the warm wind was still blowing in the early hours as I got Seatern ready to sail, leaving in the dark at 0438.

I continued to motor in Southampton Water while having breakfast and it was 6am with Seatern just past Victoria Country Park that I started sailing. The clouds ahead so looked like rain that I put on water-proofs and raised the spray hood. Close hauled, I kept the mizzen furled but the wind had become variable and, sailing with the current,  I had to put in a short tack and a bit of “dinghy sailing” to clear the BP jetty where they seem to have acquired some rotating bird scarers. I don’t like sailing with the spray hood raised so at 0622, approaching Hamble Spit, I lowered it but set the companionway curtain in case the rain started. 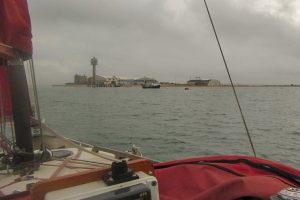 Various ferry traffic caused me to sneak over Hamble Spit before I could tack across the ship channel. Approaching Calshot the sky looked grey and foreboding. In the Solent the wind was veered so it would mean tacking against a west-southwest wind and I decided to sacrifice some of the strongest current in order to have a closer view of Lepe Country Park. 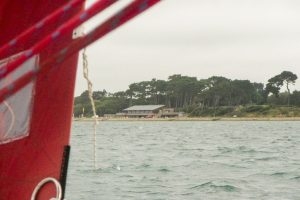 Our new NCI Stone Point station was almost invisible in the morning gloom – pleasing that we are unobtrusive! Whilst of Lepe I started wondering about taking in a reef and as a first step, at 0755, I furled the mizzen. By 0815 the sky was very grey and I put in one reef – which for once went very smoothly! 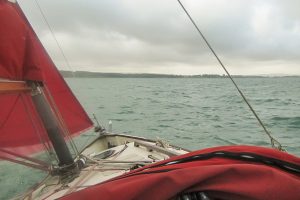 The next tack took me to Newtown Gravel Beds and from then on I tried to stay more in the main ebbing current. With one reef and no mizzen Seatern has less weather helm and the Tiller Pilot is much happier steering. However I’m not so sure that she points as high. 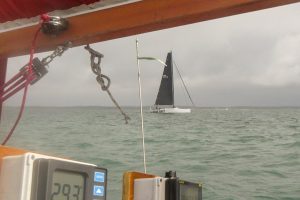 Off Bouldnor I again came across the yacht “Riff Raff” which reminds me of Rob Johnstone’s BayCruiser 23 of the same name. Apparently this one is a canting keel Cookson 50 raced by a mixed British and Australian crew.The water was flat through Hurst Narrows and a bore away slightly to skirt the coast through the North Channel.

Sailing past Milford on Sea there was a significant swell coming in – I counted an 8 second period – and there were breakers along the shore line. Just east of Danes Stream, where the beach is accessible, there appeared to be something part way up the cliff. If it was someone camping on the slumped cliff area then they will need to leave quickly if there’s a thunderstorm! Those areas become muddy quagmires after rain. 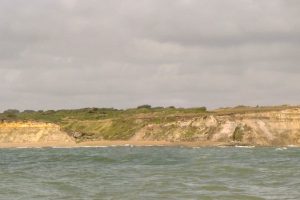 At Barton on Sea I could see Beckton Bunny where there used to be quite a good surf break until the small promontory which created it collapsed through erosion. I continued past Barton but decided to turn back when approaching Chewton Bunny at Highcliffe. Thinking that having the swell on Seatern’s quarter would be too much for the Tiller Pilot, I hove to in order to shake out the reef and eat a quick lunch. I didn’t set the mizzen hoping that Seaterns course would be easier to control without it.  It did prove possible to use the Tiller Pilot a bit on the way back to the North Channel, although Seatern tended to go closer to the wind than I wanted during times I was not steering. 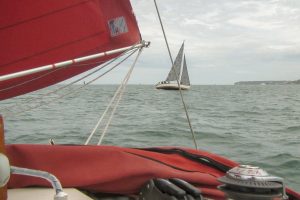 Once past Hurst Narrows it was once again a starboard tack dead run back up the western Solent and again I set a gybe preventer and goose-winged the jib with the whisker pole. With the current behind her Seatern was doing 7 knots over the ground and it seemed a bit windy for setting the asymmetric. I passed ahead of a yacht close hauled on starboard coming from my port and the helm shouted something to me about navigation. I thought he was complaining about a breach of the colregs but surely I was the stand-on vessel? Only later I realise I’d left my nav lights on all day, so thanks whoever you were and sorry I was too dumb to understand you!

All went well until I needed to gybe onto port to avoid sailing into the precautionary area. I removed the whisker pole and commenced a gybe but the main would not go across, indeed I couldn’t sheet it in. I’d forgotten the gybe preventer! With the main backwinded Seatern was now sailing backwards faster than I can ever remember. My first thought was to untie, or even cut, the gybe preventer but that would probably have been disastrous! I needed to get Seatern back sailing on a starboard run to depower the main. Reversing the rudder did nothing and I couldn’t think what I needed to do with the mizzen when in full reverse. Fortunately backing the jib brought her bows round and all was calm again! With the preventer removed I gybed and proceeded to sneak over Calshot Spit with the centreboard part raised and the rudder downhaul un-fastened. Ahead the Glovis Century was outbound at Hook and I stayed outside the reds at Black Jack before crossing Calshot Reach. 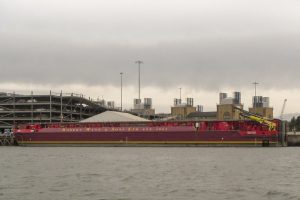 The Hudsongracht cargo ship was loading Sunseekers or similar at around berth 34 and the Terra Marique heavy lift barge was at berth 32. My guess is that she brought the huge transformer to Lee-on-the-Solent as part of the IFA2 (Interconnexion France-Angleterre) electricity link which they are working on off Chilling and off Lee. I was back at the jetty by 1651 with only just enough water to get in. Another half hour or so would have been better. [55.6nm]