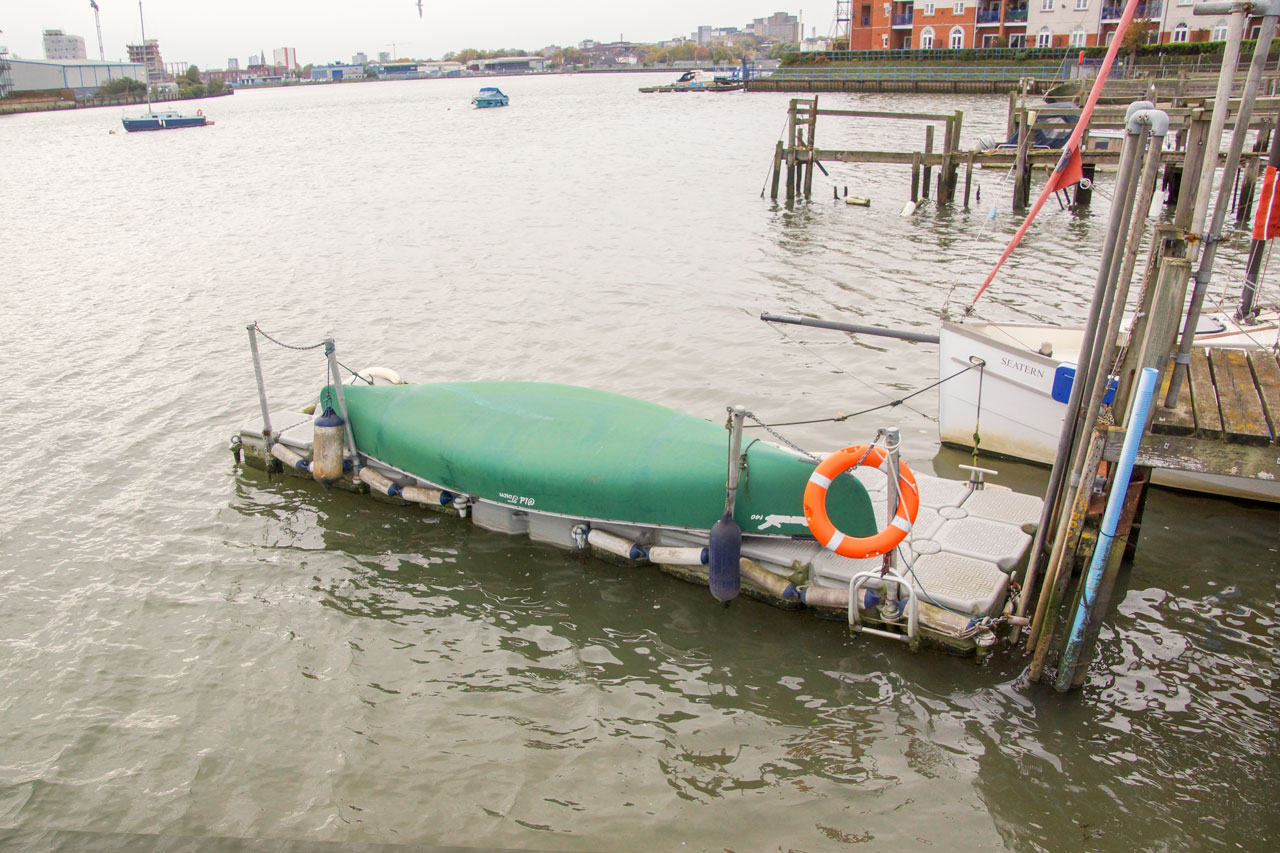 With neap tides and a reasonable weather forecast, around the 21st October would have been a possible day to take Seatern sailing. However, at the Boat Show I’d taken the opportunity to save on costs in order to buy three extra floats for the pontoon. Since then the weather has been wet and windy and this was the first time that I had a chance to insert the floats. Doing it at neap tide means that there is a longer period when it is possible to have the pontoon afloat in water shallow enough to walk around and work on it.

I originally installed the pontoon in autumn 2012 to make it easier to rig and board the two sailing dinghies I had at that time. The advantage of a pontoon rather than the jetty is that the boom is free to swing over the pontoon allowing me to raise the sails while the dinghy is still moored. With the jetty that would only be possible with an easterly wind. 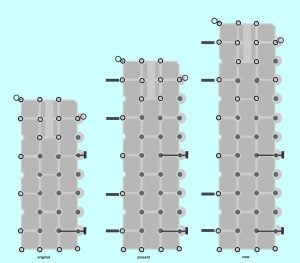 How the pontoon has grown! The bars on the left side of the more recent plans indicate where there are “vertical” posts.

Following the 2016 Boat Show I extended the pontoon by the length of a double float (just under 1 metre) to allow it to accommodate my Canadian canoe and also in an attempt to stop Seatern blowing around the outer end. The problem was that if I bring Seatern in forwards to the pontoon and make the bow fast to the central mooring cleat, with a southwest wind there is the possibility for the stern to get blown around the pontoon end. Unfortunately the 2016 extension has not fully cured the problem so now I’ve added another double float extension.

Even with the new extension the total length of the jetty plus pontoon is still less than neighbouring jetties. However, this will be the last extension since the pontoon is only moored at the jetty end and I’m worried about the extra leverage if I should bring Seatern in rather too hard and hit the outboard end of the Pontoon!

It’s surprising how many bits it takes to insert 1 extra course of floats and thus extend the pontoon by 1 metre. The shopping list included 3 double floats, 7 sliding nuts, 5 “mushroom” linking pins, 2 “bolt” type linking pins and 2 fenders. Also, extending the pontoon is not straight forward because of having a “slipway” feature at the outboard end. Originally this aligned the keel of my Lightning 368 dinghy when I hauled it onto the pontoon. Now it does the same for my Canadian canoe.

Plan view showing where the new parts (in red) were inserted.

In order to insert the new floats the existing pontoon had to be split across the central part. Attaching the new floats one by one to the inboard part of the pontoon is relatively easy. However attaching the outboard part of the existing pontoon to the new floats is more difficult since the joining lugs at each of the joints have all to be inserted in the correct vertical order at the same time! Last time I did it I really struggled but this time I was lucky and it all went together at the second attempt.