(reprinted from my post on the NCI Calshot Tower “Blog”) 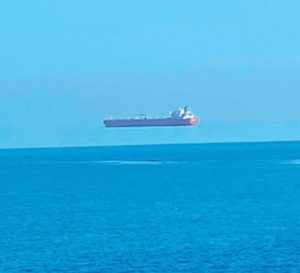 NCI Calshot Tower watchkeeper Kenneth Burton spotted this photograph of a ship, apparently hovering in mid air, in “The Week” magazine in their regular feature “It must be True… I read it in the Tabloids“.

In fact, it did not just appear in the tabloids. It was featured by the BBC, and taken up by the Guardian, the Independent, the Hindustan Times, and many others. I’m told it went “viral” on the web.

For an explanation for the photograph they all quoted BBC meteorologist David Braine who said that it was a “superior mirage” caused by the sea being colder than the air. This had caused a “temperature inversion”, where the lowest air is colder than air higher up, causing the light rays to be bent to form the mirage.

But don’t believe what you read in the papers!  The ship appears far too clear for a mirage, and, if there was a strong and stable temperature inversion, the wind would not reach the surface to create the rippled water seen in the foreground.  Also, there appears to be a feint horizon line beyond the tanker with some more ships vaguely visible through the mist.

My own interpretation is illustrated here (using the BBC version of the photo):

The water surrounding the ship and extending to the horizon is calm and reflecting the sky. This water is probably colder than the air and that is preventing wave formation in the light winds. The rippled water is probably at or slightly above the air temperature, and that has allowed waves to form. Possibly this warmer water has come out of the large River Fal estuary known as Carrick Roads. Between the two different water masses is a well marked ocean front which has been falsely interpreted as the horizon.

Is my interpretation correct?  I discovered in a local news source, The Falmouth Packet, a quote from the photographer, David Morris, who also disagreed with the “mirage” explanation… “To me it was an optical illusion caused by the still water. I have seen similar before, but not as good as this” …and he took the picture!