28th April: Why do Yachts run aground? 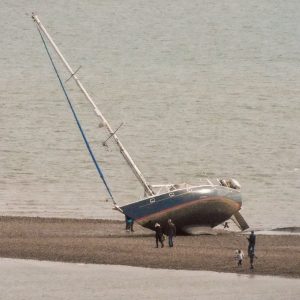 (reprinted from my post on the NCI Calshot “Blog”)
On Friday 9th April a yacht ran aground on the gravel banks of Calshot Spit (see “Incident: Yacht Aground” ). The report on the RNLI Calshot Facebook page attracted several comments from Facebook users who criticised the yacht’s crew both for running aground and for requiring assistance to re-float, I’ve quoted some of them below (in italics).

Of course, it is indeed bad seamanship to run aground, but as a fellow yachtsman here are some reasons why yachts get caught out; (I have no connection with the yacht involved in the incident). 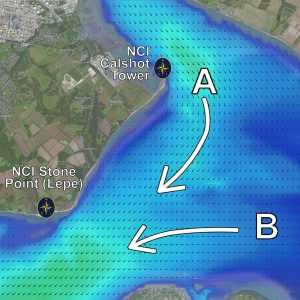 Facebook Comment: “There’s no excuse in being there”… When sailing and trying to make headway against an opposing current it is often necessary to hug the shore where currents are typically less, and there may even be a back eddy to exploit.

Say you are trying to sail from Beaulieu River to Southampton with an ebbing tide. The diagram shows that the currents are least (darker blue colours) if you hug the mainland coast remaining in as shallow water as possible.

This course will take you over Lepe Spit and the various gravel banks at Calshot Spit. Unfortunately these obstructions are very poorly represented on the Admiralty chart. 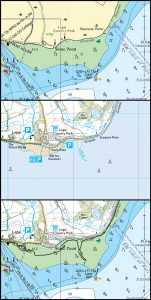 Taking Lepe Spit (sometimes known as “Horseshoe Spit”) as an example. There is little indication of it on the Admiralty Chart (top in the diagram). Indeed it shows up better on the Ordnance Survey map (middle in diagram)! As at Calshot, the gravel bank is steep sided; by the time it shows up on your echo sounder it is probably too late to tack.

Facebook Comment: “If you got on by yourself then you should be able to get off again”… Large sailing yachts are heavy and underway they have a lot of momentum which can drive them hard aground. Also while sailing they are usually heeled over. When tacking or aground they come upright, increasing their draft and compounding the problem. Once aground, getting off can be very difficult. Heeling the yacht by hard sheeting the sails, or deploying an anchor to “kedge off” sometimes works, often it doesn’t. When the tide returns there still may not be enough water to refloat the yacht without help.

Facebook Comment: “Glad we’ve got the [Lifeboat] crews in the area for real emergencies as well”… A yacht going aground whilst underway can be a violent event possibly causing injury to the crew and/or damage to the hull. On receiving a report of a yacht aground the Coastguard will treat the incident as potentially serious and, if lacking further information, will often deploy a lifeboat to check that all is well on board.

Leasons I can learn! As a yachtsman, there are useful points to learn from such incidents. Firstly, previously I would only think of calling the Coastguard if it were a real emergency. However if, having gone aground I am simply waiting for the next tide, then by calling the Coastguard and telling them the situation I might well avoid a lifeboat being deployed.

Secondly, there are books and web sites with photographs of the Solent coasts at low tide and descriptions of leading marks to avoid obstructions. I’ve got two such books in my boat, I’ll pay them more attention in future!