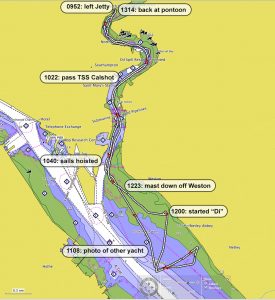 Seemed to take ages to prepare so left jetty at 0952 slightly later than I was hoping. Everything takes so much longer when you haven’t done it for a while; still, this was meant to be a “shakedown cruise” and It was mainly me in need of shaking down! 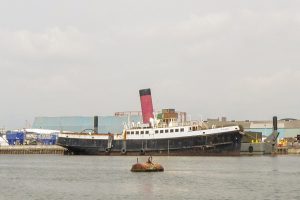 I was still reattaching the boom to the mast when I was surprised to pass the historic tug/tender TSS Calshot near James Wharf, just downstream of Ocean Quay. Despite being No.1 on the Historic Ships Register she has apparently been threatened with being scrapped but now hopefully saved.

It was more or less calm with the only breeze being almost entirely due to the apparent wind so once under the Itchen Bridge, and past the sailing dinghy and paddle board classes underway at the Southampton Watersports Centre, I started raising the main sail. The Alison MacGregor past on her way up the Itchen and one of the crew waved, but I couldn’t tell if it was an NCI colleague. It looked like she was on a training trip without passengers. 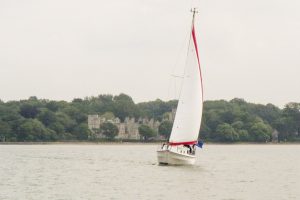 Another yacht! Netley Castle in the background.

By 1053 Seatern was under sail off Weston Shore with main jib and mizzen set and on a very broad reach. At around 1100 I called NCI Calshot Tower on channel 65 for a radio check and was told “clear but quiet”. I also checked that Seatern’s AIS was showing up on the Marine Traffic web site. Given the light winds I started emptying the ballast tanks.

Around 1108 I crossed ahead of another yacht and took photos; there were few yachts out under sail. The ballast tanks were more or less empty by 1118 by which time Seatern was off Netley. Given the light wind we’d travelled further than I expected which suggested that there was already a fairly strong ebb current.  That was confirmed when I started tacking back. Rather than fight the current, at 1200 I started my outboard “Di” and, anticipating traffic in the river, I got the masts down while still off Weston. 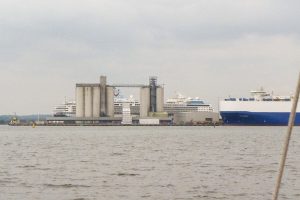 New construction near the Grain Silos.

I was surprised to see some new construction over near the Dock Head grain silos, but I couldn’t work out what they are building. Maybe some new machinery to transfer grain to or from the ships?

Back in the River Itchen the survey vessel, EGS Pioneer was moored near the old ferry terminal. Across the river there a high tower is being built as part of the Vosper-Thornycroft site development. It has appeared since I last came down the river and I think there is at least one more similar tower (if not two) planned. I hope the people who bought flats in the lower blocks realised just what they would have in front of them! I’m disappointed with the looks and feel of that development. I think the retail area will be a bleak and windy space; I hope I’m wrong.

At Kemps (or was it the upstream marina) there was a Bristol Pilot Cutter (or maybe Bristol Trawler) moored up, I couldn’t see her name. Just before Northam Bridge the CO alarm started complaining about the exhaust fumes blowing into the cabin and I had to take a battery out to shut it up. Back at the pontoon by 1314 and moored at the jetty by 1328. It was warm and I had a short swim before putting Seatern to bed.