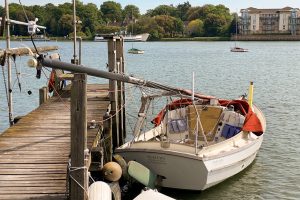 On Sunday 30th May I’d used the near-springs high water to lower Seatern’s mast and check the shackles and other gear on the mast. I replaced the cable clips which I’d used to seize the shackles with monel metal – I’ve done that with deck level shackles too. Then I put the sails back on her and, since there was very little wind, raised them to check everything seemed to work. 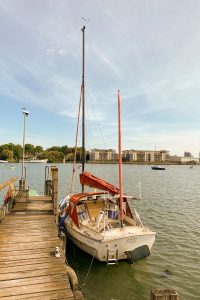 By now I’ve checked out just about all that I can think of. I had to free up the centreboard by taking the table top off the casing and lowering and raising the board several times until it lowered under its own weight.

One thing that doesn’t seem to be working is the echo sounder temperature since the Garmin chart plotter is showing around 51°C rather than around 15-20°C. A quick calculation suggests that depths will be overestimated by around 5% so that’s not too disastrous!

The Copper Coat antifouling has started to allow weed to grow around the water line. However at the Boat Show (back in 2019 pre-covid days) the guy on the Copper Coat stand said that all it needed was a rub down with some fine grit paper. I’d been thinking that would mean putting Seatern onto the trailer but that wouldn’t make it that easy to get at the bottom of the boat.

I decided to use the neap tides on 6th/7th June to try careening Seatern without actually letting her dry out on her side onto the dubious surface of the local mud with it’s concealed bricks and stones! Having emptied the ballast tanks, using my threefold purchase tackle attached to the jetty for hauling down Seatern. I used the main halyard on Sunday (6th June) whilst cleaning Seatern’s starboard side. However I noticed the mast was bending a bit so the next day I used the spinnaker halyard whilst doing the port side.

In general I was very pleased with the state of Seatern’s underside. There was much less growth than I feared with only a few small barnacles and a patch of worm tubes on the port side near the keel.  However in checking the photos for this post I’ve noticed that the aft most end of Seatern’s “keel” (just forward of the outboard well) appears to have been worn down to wood so I need to careen her again and take a look at that, possibly adding a metal rubbing strake.