3rd July: Round the Island race 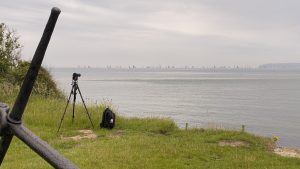 My position near the Anchor War Memorial at 0617

The 2021 Round the Island race was held on Saturday 3rd June and I arrived at Lepe Country Park at around 0600 having obtained permission to park in the Training Hut area, since the Park does not open until 0700. I wanted to be in position for the first start anticipating that the fastest boats (starting at 0630 and 0640) would rapidly past by Lepe on their way to the Needles.

At least they would have done if there was more wind. It was a grey misty morning with only a light southeast to south breeze forecast to increase and veer southwest.

The top panorama shows the first start at 0630 (IRC Group 0 and 1, Open 60, Class 40, and Clipper yachts).  I was surprised that many of these yachts stayed close to the Isle of Wight coast rather than seeking more wind and the ebb tide further towards the mainland. Indeed the trimarans (starting at 0640) did come out into the more central part of the west Solent.

Apparently the overall winner was a local Cowes boat called Eeyore, an Alacrity 18 foot bilge keel which finished the race in 9 hours 6½ minutes. Quite an achievement, what’s more this was the second year running! She would have been helped this year by being in the last classes to start and therefore benefitting from avoiding the initially very light winds. The fastest boat was the MOD70 trimaran PowerPlay which took 4 hours and 11 minutes. The fastest time ever was set in 2017 at under 2 hours and 23 minutes by the same yacht, although at that time she was “Concise 10”.

Here is a photo gallery of yachts in the race…

Here are some of the more unusual yachts…