15th July: Nearly to the Needles 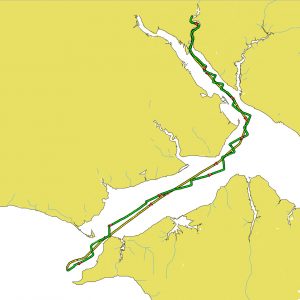 The tide was too early for me to be able to leave at the first opportunity but I thought I’d go out on the ebb not expecting to be able to go that far. However as it turned out a NNW wind direction enabled a longer sail than I had anticipated.

I woke well before 3am and hoped to leave fairly quickly. However having singled up I went into the house for a final time and came back out to hear what at first sounded like a cricket chirping, then possibly a car alarm, but then realise it was coming from Seatern! It turned out to be an AIS-MOB detected by my Garmin chart plotter which was indicating a SART at position 0.7nm at 165°T.  I phone Solent CG who said that the it had been detected the previous day somewhere in Shamrock Quay marina but could I watch out for anything “untoward” as I headed past. After that delay it was 0410 before Seatern left the jetty. The SART alarm continued to sound intermittently and there seemed to be no way to permanently cancel it. 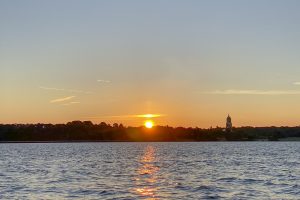 By 0450 Seatern was off Ocean Village and, with little wind, I hoisted the main. By 0505, off Weston Shore, Seatern was sailing under main, jib, and mizzen. I wondered about the asymmetric but with the wind likely to increase with the rising sun, and wanting to have breakfast, I settled for goose winging the jib using the whisker pole. Seatern was on a run/very broad reach on port tack. 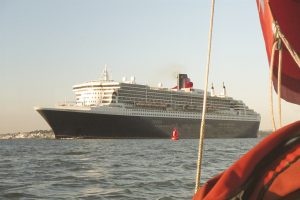 On reaching Southampton Water I’d watched the cruise ship Anthem of the Seas going into port. Now the P&O cruise ship Britannia went by followed by the military ro-ro ship Hartland Point, she is looking in need of some TLC !  Out over Calshot Spit I saw the Cunard liner Queen Mary 2 completing the Prince Consort turn and she passed Seatern near the Bourne Gap buoy.

The wind direction and the ebb tide was allowing Seatern a direct reach along the western Solent at around 5 knots and I began to wonder whether I could get through Hurst Narrows before the tide changed. 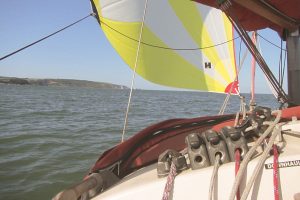 However nearing Hurst the wind was less strong and, while Seatern was still sailing well through the water, her speed over the ground was now less than 3 knots. I decided to set the asymmetric but discovered the sheets were in an tangle. I had hoisted it a few weeks before at the jetty and must not have taken enough care in repacking it. However by 0842 Seatern was in the Narrows with the asymmetric deployed and the jib furled.

With the Needles well in view Seatern suddenly turned to starboard, heading more upwind. The tiller pilot went to full extension and the alarm came on, and I jumped to take over steering, wondering what had happened. The asymmetric was flapping wildly and I assumed that was because it needed sheeting in for the new course. However when I pulled on the sheet I realised it was no longer fastened to the clew! It turned out  that the snap shackle used to connect the sheets to the sail had unsnapped. Since I’m using the top down furler it’s not obvious to me why a snap shackle is used at the clew? 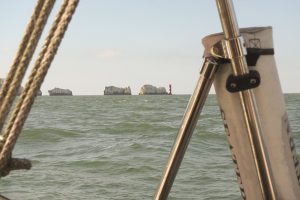 Having furled the asymmetric I managed to lower it to the deck, rather than into the sea, by using the jib sheet wrapped around the sail to control the drop. This took time and, although Seatern was hove to, she was getting closer to the Shingles Bank.  I decided to give up going against the current to get closer to the Needles and aware that it would be a beat back, put in a single reef in preparation. 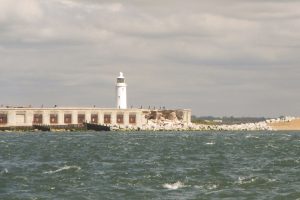 Tacking back through Hurst Narrows I got a better view of the bit of Hurst Castle which has collapsed after being undercut by the sea. It does not look that disastrous given the total size of the place, however it was clearly a wakeup call to stop more being undermined.

Sailing back the wind kept shifting direction and on one occasion Seatern, being steered by the tiller pilot, went into irons. As a result I took over steering for most of the way back. A couple of times I noted that Seatern was sailing as fast as nearby larger yachts by pointing higher, suggesting I was making better use of the wind shifts! 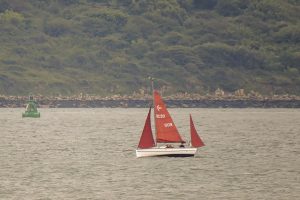 Passing Lepe I called NCI Stone Point on the radio. To avoid wind noise I used the cabin fist-mike and, of course, there was a wind shift so I had to cut the transmission short. However it was worth the call since the watch leader, Peter Brown, took a couple of photos of Seatern passing the Gurnard Ledge buoy as viewed from Lepe Country Park. 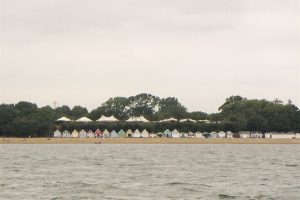 Nearing Calshot I was interested to see the roofs of the “Pop-up Hotel” tents in the Cadland Estate field. After going past (rather too close to) Calshot Light Float I shook out the reef since the wind had decreased, but it had also shifted so I ended up having to tack up Southampton Water.

Off Weston (at about 1508) I had the sails furled and, as has become my practice, lowered the masts.  It seems very early for the latter, but it avoids having to do it amongst traffic on the river. By 1618 Seatern was back at the jetty.

I was surprised to find the trip amounted to 50nm despite having not reached the Needles; I guess it reflects the amount of tacking!

[Photo Album for the Trip]