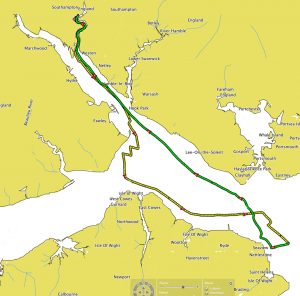 [Photo Gallery for the trip]

I rose before 3am to find a very dark morning and, at around 6 kts,  more wind than normal before dawn. Seatern left the jetty at 0400, I raised the main sail after the Itchen Bridge and by 0500 was sailing off Weston under main, jib and mizzen. It was a close reach down Southampton Water and, with the wind somewhat gusty, I was not confident to prepare my usual breakfast cereal. 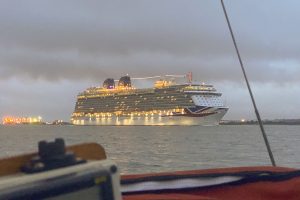 Approaching Fawley refinery I met the P&O Cruise Ship Brittania and tried using my iphone to photograph her despite the semi-darkness. A vehicle transporter, the Morning Carina, followed before, with a break in the ship and ferry traffic, I tacked across to the Calshot side just south of the Esso jetties.

With the forecast from yesterday of a south wind in mind, I started to tack westwards keeping north of the precautionary area since the P&O Ventura was inbound. However  I was already loosing the ebb tide and, after a long tack towards Egypt Point, at about 0705 I changed plan and turned eastwards. This had the added advantage of allowing me to eat breakfast while watching Osbourne Bay pass to starboard shrouded in thick drizzle. A fishing boat was a minor irritation 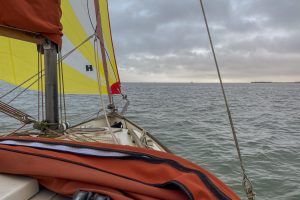 Around 0815  at Wooton Creek I needed to free off to head beyond Ryde Pier and Sands. With the asymmetric pulling strongly, and aided by the increasing flood, Seatern was now doing 5 to 6 kts over the ground. There was the normal assortment of ferry traffic between Portsmouth and the Isle of Wight – Wightlink ferry and fast catamaran, and the HoverTravel hovercraft

Flying the asymmetric was forcing Seatern due east and at about 0855 I furled it in order to harden up towards No Man’s Land Fort. At 0910 I put in a short tack to avoid the fort (!) before continuing to head on towards Bembridge. However it was now clear that the front had gone through and I was worried that the wind might veer too much leaving me tacking against wind and tide to get home. At 0935 I turned for home by tacking in towards Seagrove Bay. 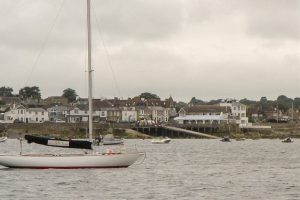 Approaching the Seaview Yacht Club at Nettlestone Point, I admired their fleet of Seaview Mermaids. Apparently they were originally designed in 1907  as a 26′ gaff rigged racing boat. Since then the fleet has been renewed three times progressing from wooden carvel built hulls through cold moulded ply to glassfibre but maintaining the classic hull shape. I find it surprising how these tiny local fleets of small keelboats have managed to keep going compared to the many dinghy classes that have fallen by the wayside. I guess the greater investment needed for these keelboats is an incentive to maintain them. 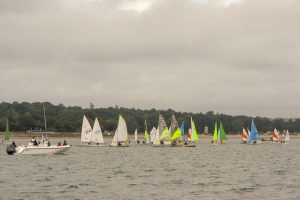 Beyond the Point a dinghy race was starting. Judging by the cries of “starboard” and the mix of oppies and other small boats I guess it was for younger competitors. Watching all this I decided it would be sensible to avoid the race area, and then remembered I needed, in any case, to tack out to avoid the shallow water of the Debnigo bank which I was in danger of running into. 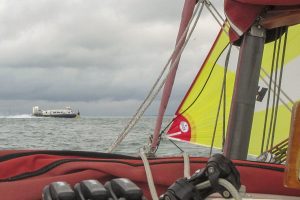 Having cleared the race and the Debnigo I wondered if I could use the asymmetric to power Seatern against the incoming tide. Unfortunately I’d de-rigged it after the first use thinking that I was finished with it for the day. However having re-rigged and set it, I realised that the wind direction was marginal with Seatern being pushed towards Gilkicker Point. After about 25 minutes and more views of the ferries, at about 1110 I gave up and went back to main, jib and mizzen for a port tack beat back towards Southampton. 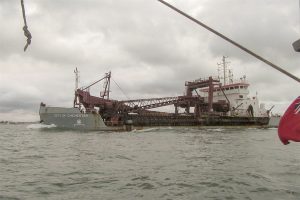 The wind speed and direction were varying so I was steering Seatern so as to work her up wind as much as possible when, at 1120, I glanced behind to se the City of Chichester, a local dredger also bound for the Itchen, coming up close behind. As Seatern started to surf on the wake the rudder suddenly became heavy and Seatern was hard to control.  I had been sailing with the centreboard slightly raised to decrease the weather helm which Seatern has with the mizzen set, and the helm had indeed been light. I realised the rudder must have come up and I had to let out the main before I could manage to get it back down. Maybe I’d touched the Debnigo bank earlier without realising it.

Ahead off Hill Head harbour there was a racing fleet of black sailed yachts with accompanying ribs. They were beating out and coming back with asymmetrics set. I didn’t want to get amongst them, particularly being on port tack, so hove to while they did their downwind leg which, thankfully, turned out to be the end of the race. 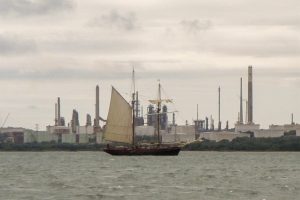 As Seatern entered Southampton Water there was a classic top-sail schooner coming from the east. I assume this was the Sail Training Ship “Johanna Lucretia” bound for Southampton to take part in the Mayflower 400 anniversary commemoration on the 17th August (a year late due to covid). The wind was now too strong in the gusts for Seatern’s unreefed main, but too light in the lulls for having it reefed. I’m always amazed at how turbulent the flow is on the east side of Southampton Water opposite the Esso jetties with their moored oil and gas tankers. As I’ve done in the past, I sailed Seatern like a dinghy with the main largely backwinded by the jib in the strongest gusts.

At around 1335 off Netley I furled the sails and de-rigged the asymmetric. Nearer to the mouth of the Itchen I lowered the masts and I was glad I had done so since I had to contend with an outbound ship, Southampton Water Activities Centre dinghy sailing classes, and the usual rowers and river traffic on the way up the Itchen. I left the masts down until Seatern was back on my pontoon which seemed to make it easier to berth her without being blown around by the (still increasing wind).

Back at the jetty at 1512 having covered 42.4nm over the ground and significantly more through the water!

[Photo Gallery for the trip]