27th August: to the Needles 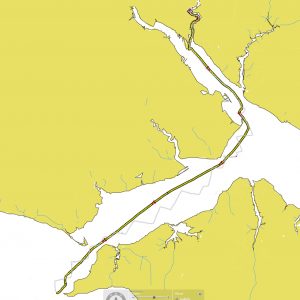 Seatern’s track out to the Needles

Woke up about 0200 conscious that I was bound to be late on the tide (why do the best tide times fall at the weekend?). However casting off was delayed when I discovered that the tiller extension had snapped off! I replaced it with one from the throttle extension for the Torqueedo outboard when used in my canoe. To my surprise the screw holes matched; is there an EU standard for tiller extension fittings? Finally got away at 0325.

Sail plans and speed over the ground

It was a very dark night and I had to strain to see the various unlit buoys and piles. I started to hoist the main after the Itchen Bridge but it wouldn’t go up. After a good deal of waving a torch at the rigging I realised that the main halyard was the wrong side of the sail pack. Having dropped the sail and detached the boom, off Weston I turned Seatern into the wind and finally got the main up. However all this meant that Seatern was further towards the green buoys for her track down Southampton Water than normally would be the case. 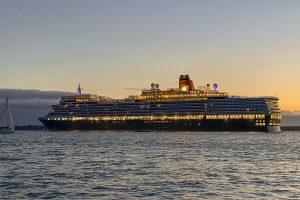 Given the darkness I didn’t try to rig the asymmetric but just used jib, main and mizzen, and took the opportunity to have breakfast. Unusually, given the early hour, at the Hamble there was company from another yacht and we were both able to watch the cruise ship Disney Magic going up Southampton Water. Next the Queen Elizabeth cruise ship was inbound so I took the opportunity to dog-leg across the shipping channel before reaching Calshot.

I cut closer in over the Calshot Spit banks but then was surprised when the other yacht caught and passed me quite rapidly.  I think (hope) that he was motor sailing! It was a close starboard tack reach down the western Solent so, having passed close to Lepe Spit cardinal mark, I decided it would probably be possible to free up enough to fly the asymmetric. 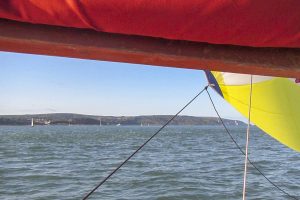 A strange patch of conical waves!

So by 0645 Seatern was under main, mizzen and asymmetric and soon passing level with the Newtown Creek entrance. To get through Hurst Narrows before the flood set in meant getting there by about 0800 and with the asymetric set, that now looked possible.  In the event Seatern was off Hurst Castle with it’s undercut section by 0754! It always amazes me how at Hurst Narrows, even near slack water and with relatively light wind, areas of water have strange conical spitting waves as if a shoal of fish were near the surface. I tried to photograph one area but it doesn’t really show.

Beyond Colwell Bay the wind freed off and, despite holding on to the tack as long as I could, I finally gybed using the top down furler to reset the asymmetric on the new tack. However Seatern was now heading too much toward the island coast so, having failed to goose-wing the asymmetric (I need a telescopic boom) I furled the asymmetric and set the jib. However, remembering the trip to No Man’s Land fort, when I’d ended up rigging the asymmetric twice, this time I left it hoisted but furled with the sheets secured to avoid them washing under the hull. 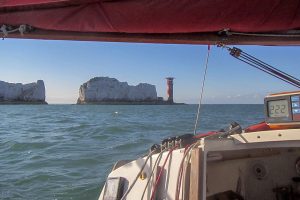 I was worried about the mention of “variable 3 or less” in the weather forecast and had decided I should turn back at about 0900 which would leave me with a good safety margin for getting back to the jetty should the wind fall light. By the time Seatern was off the Needles it was 0850. Ahead there was a field of small breaking waves in the area of the Bridge. It seemed a good time to turn back for Southampton.

Soon after turning the wind freshened markedly and Seatern was well heeled so I put in a reef well before getting back to Hurst narrows. A fleet of small yachts were racing out of Yarmouth (I think) with spinnakers set. Looking at the photos now I think they were Folkboats. 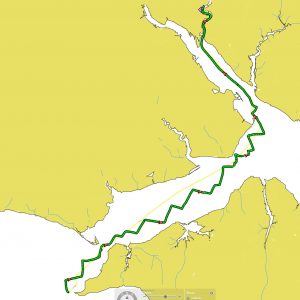 Seatern’s track back to Southampton

Still intent on making progress while the wind held I was watching the course made good on the chart plotter in comparison to Seatern’s heading and tacking each time I reached the edge of the main current. Sometimes that was also clear from slicks or upwelling areas on the surface of the sea. Around 1055 off Newtown Creek the wind seemed to be falling away and I shook out the reef. I had trouble tensioning the luff of the main sail until I let off the kicking strap which made all the difference.

Sometimes when tacking Seatern gets into irons. To avoid this, in the past I’ve tended to back the jib until Seatern is well round. However I’ve now realised that the problem is that, until the jib is sheeted and pulling on the new tack, the mizzen is forcing Seatern’s head into the wind. One way around that is to ease the mizzen’s sheets before tacking, but the problem is that both windward and leeward sheets need to be tensioned to get the mizzen to set properly. So it is easier to leave the sheets cleated and let the mizzen self-tack, but that means I have to be very fast in sheeting the jib on the new tack.

Anyway, after missing a tack through not being fast enough, around 1124 I furled the mizzen. Not only does that make tacking easier, it also decreases the amount of weather helm which, going up wind, is more than I prefer. 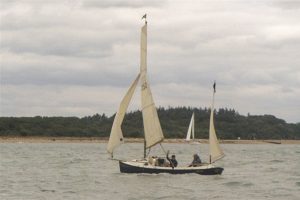 A friendly wave from another Swallow Yacht

By now I was approaching the mouth of the Beaulieu River and I sailed in towards to yellow buoy which is on the entrance transit before calling up NCI Stone Point on ch.65 as a courtesy call. Sailing out towards Lepe Spit cardinal mark I saw a Swallow Yachts BayRaider Expedition (BRe) coming the other way so I tacked nearby to say hello. 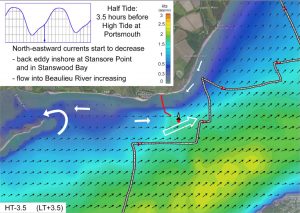 Following the encounter I decided to continue the tack towards the “D-day remains” in Lepe Country Park. This took Seatern into a back eddy as can be seen from the track plot. I’ve since checked and the current plots I did for NCI Stone Point do indeed show a back eddy at that state of the tide.  It really emphasises the need to be in the best part of the current for the direction you want to go!

I now kept relatively close to the mainland shore going past Lutyen’s Tower at Eaglehurst, rather too close to the old Fawley Power Station outflow, and then viewing the “Pop-up Hotel” at Hill Head which apparently has received bad comments due to the high prices charged and lack of facilities provided. It seems that guests are paying expensive hotel prices to live in a tent in a field!

The tack took me out to the Calshot Spit light-float and I got a chance to view the met instrumentation installed on it. Going past Calshot Tower I was going to give them a courtesy call, but I was rather preoccupied deciding when to tack across the shipping lane given the various traffic. In particular I was worried about a small tanker which looked to be out bound from Southampton but which, it turned out, was going to swing and dock at the Esso jetties.

Bramble wind observations during the period of the trip

Once over on the green side I was faced with tacking up Southampton water in a wind which initially appeared to be failing. I gave up off the Hamble entrance and started my outboard “Di”. That gave me a chance to derig the asymmetric and get the mast down before entering the Itchen River. Back at the pontoon by 1530 where I got the mast back up before swinging Seatern. [52.2nm]

[Photo Album for the Trip]