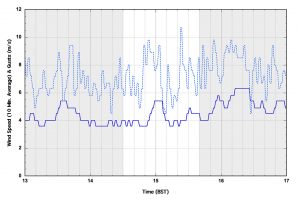 Yesterday (Monday 27th September) I had a really good sail in my “Sea Lightning” (using the small Lightning rig on the Seafly hull). On the jetty the average winds were around 8kts (4m/s) westerly but the gusts were 18kts or so. In the areas of the river where the wind accelerates around the blocks of flats it was stronger still.

Despite being small, in a strong wind the Lightning rig can really power the Seafly.  She was really flying in the gusts, spray everywhere and the forward part of the hull airborne. Nowadays it’s the nearest I can get to surfing and it’s good I still have the ability to handle the boat in a strong breeze. You need fast reactions on the river with the wind is so variable in speed and direction as it comes off the land.

The last time I was out I’d adjusted the main sheet block so it was easier to use the cam cleat but now I discovered that sitting out there was a tendency for the sheet to cleat itself and a couple of times I was forced to luff up to keep the boat upright. I’ve now  readjusted the block for the next time!

The only slight annoyance were two University coxed fours with an accompanying rib. Normally I give way to the rowing boats partly out of courtesy, but also because they seem to expect it! The colregs say that a powered craft is one driven by machinery and to my scientific mind an oar is a machine (just as a hand powered sewing-machine is a person powered machine). Since I’m sailing and they are powered, I should be the stand-on vessel and they the give-way vessel. 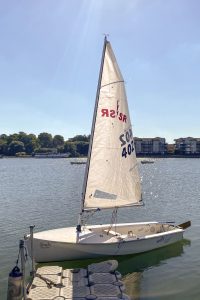 On the 20th September I was sailing Sea Lightning near Northam Bridge. I had seen an orange rib through the bridge piers but it seemed to be unaccompanied. However the next time I looked the rib and a rowing eight had emerged, the latter must have been hidden by the bridge pier. The eight was on collision course with the girls feathering their oars frantically but clearly not stopping in time and I had to throw Sea Lightning about to avoid a collision. The coach in the rib could easily have warned them to steer around me but obviously had not!

Anyway, yesterday I was keeping out of the way of the coxed fours by luffing up near the flats near Bitterne Manor to allow them to pass. Instead as they came level with me they stopped rowing, trapping me in the area where the wind gusts round the flats. I didn’t want to run down wind but couldn’t pass upwind of them. I managed to reach around their sterns with sea lightning planing and receiving some worried looks from the rowers!

The University rowing club have every right to use the river but they should understand that they should respect the colregs and be considerate to other river users! 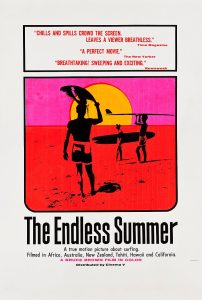 That evening I found the vintage surf film “The Endless Summer” on Amazon prime. Released in 1966 it was interesting to see the relaxed long-board riding style of the Americans. Hang five, hang ten, etc. In contrast the Australians, although also on long boards, were already adopting a more modern, aggressive surfing style. I started surfing a bit after that, around 1972, when boards were getting too short to be practical on the sort of UK waves that I could handle!