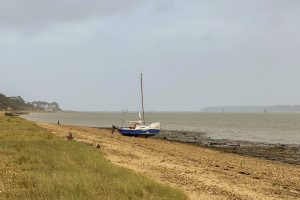 On Friday 12th November the morning watch at NCI Stone Point spotted a small twin bilge keel yacht on the beach at the Beaulieu River entrance. They were concerned as to what might happen as the tide came back in.  I was on watch in the afternoon with a watchkeeper who, although still a trainee, was experienced and soon to qualify to watchkeeper status. 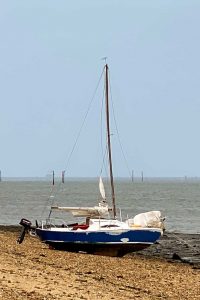 Looking at the yacht through the telescope it appeared that the sails were not properly furled with the jib apparently just lowered onto the foredeck. As the wind had increased to force 6 southwesterly as the tide rose I was concerned that the yacht would be on a lee shore. Since I was the watchkeeper with sailing experience I left the station on “Beach patrol” and drove along Inchmery Lane to the point, just past the Inchmery House grounds, where there is a unmade “parking area” and a path down to the beach. from there I walked back to the yacht.

There was someone inside the cabin who asked who I was and what I wanted.  He said that the Coastguard knew he was there and that he had a mate coming to tow him off if need be when the tide came in. He said that the yacht didn’t have a name but that it was a” Hurley 17″. Not feeling very welcome, I got a GPS lat/long position for the yacht, took a photo from a respectful distance, and returned to the station. Not wanting to give the impression that NCI was interfering when all was under control, I didn’t notice that the yacht’s rigging was broken. 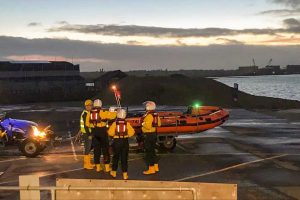 Calshot IRB being readied to tow the yacht off the beach.

Back in the NCI Stone Point station I phone Solent Coastguard to tell them that we had “eyes on” the yacht. However, despite what I had been told, they had no knowledge of it. After discussion they gave me an incident number and tasked Lymington Coastguard Rescue Team to investigate.

Once at the scene Lymington CRT contacted us on ch.65, agreeing with the our assessment that the yacht was in a perilous situation. They had managed to talk to the person onboard and found it had no safety equipment of any kind. They arranged for the Calshot D-Class lifeboat ‘Willett’ to help refloat the yacht on the incoming tide and escort it to a place of safety.

Darkness was due before the tide came in, so at NCI Stone Point we were stood down by 1600hrs so that we could close the station and we left with the Lymington CRT still at the yacht. Driving home via Inchmery Lane I passed the CG vehicle parked near the footpath to the beach near Lepe House.