With roads in the area scheduled to be closed, the morning watch arrived early at Calshot Tower on the morning of 31st October to see, at about 0700hrs, the end of Fawley Chimney. A local landmark and navigation aid the chimney will be missed by many people. Here is the video from Calshot Tower.

Most of the Turbine Hall had been previously demolished on 29th July. Roy Pullinger, with whom I was often on watch before I swapped to mainly doing Stone Point watches, took the video of that (he also edited the chimney video). Roy used to work in the Power Station…

By now it is hard to remember just how much the power station dominated the horizon. Here are some comparative views from Calshot Tower, I’ve adjusted the photos to show the same scene, honest! 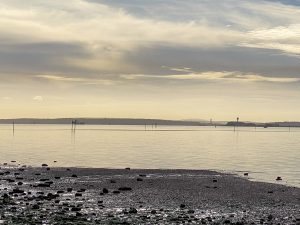 It felt even stranger when I took the outboard to be serviced at Hamble Port Marina.

Looking across Southampton water I couldn’t at first grasp which was the mainland and which was the Isle of Wight. Then I picked out Calshot Tower looking like the highest point on the mainland. In the past it was dwarfed by the power station buildings.