Why do Rainbows curve? 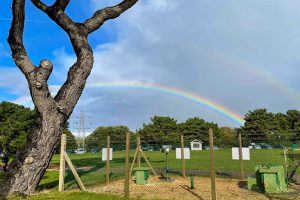 On Monday 25th October the watchkeeper at NCI Stone Point looked behind the station and saw this rainbow with a weaker secondary rainbow above it. It reminded me that one evening at the Swallow Yachts raid in 2016 I’d been asked to explain why rainbows are curved and at the time I’d had to think hard in order to explain it.

Recently I’ve been sitting on the jetty in the early morning looking at the reflections of the lights from the flats opposite and it struck me that the  form of the reflections, and the shape of the rainbow, were created my a common mechanism… we only see the light that enters our eyes!

That statement seems obvious, indeed so obvious we take it for granted. However it is the reason for the shape of both the reflections in water and the curve of rainbows. I will try to explain.

On the other side of the river from where I sit, a footpath runs in front of the two blocks of flats and there is a line of lamps which illuminate the path. Here are three photos showing the appearance of the lamps and their reflections.

In photo (a) the river surface is very calm and both the lamps and their reflections appear as well focused spots. Why is that? After all, the lamps are not spot-lights trained specifically on me, they are designed to emit light over a wide range of angles in order to illuminate the path.

Diagram 2. Light hitting the calm water surface at the wrong distance does not get reflected towards my eye.

Diagram 1 shows how the light is reflected from the water in order to reach my eye. You may remember it from school as the “Law of Reflection: the angle of incidence equals the angle of reflection”.

Thus, when the water surface is calm, only the light hitting the water at a specific distance is reflected into my eye and the result is that I see a clear image of the lamps as spots on the water.

Diagram 3. The ripples allow different parts of the water surface to reflect light from the lamps to my eyes.

However photo (b) was taken after a boat had gone down the river rippling the water surface. The situation now is shown in diagram 3. The ripples create bits of water surface at various distances from the lamps which are at the correct angle to reflect some of the light into my eyes. The result is a long line of reflected light rather than a spot reflection.

In photo (c) a slight breeze has rippled the water more.  So now there there are even more bits of the water surface at the correct angle to reflect light into my eyes. Some ripples are reflecting the rays through sideways angles and the part of that light which reaches my eyes results in a wider “smeared” reflection.

So, in both photos (b) and (c) I perceive the reflections as a line of light stretching away from the lamps on the footpath towards my eyes. The lamps are emitting light, and it is being reflected off the water, in a whole range of directions, almost the whole river surface is being illuminated.  However I only only see the light rays that hit the water surface at the correct angle for it to reach my eye, so what I see is a line of light directed towards me. 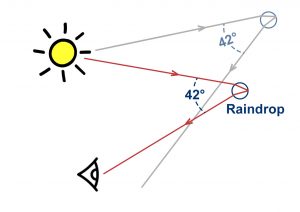 Diagram 4. Light which enters a raindrop is mostly reflected back at an angle of about 42 degrees.

What has this got to do with the shape of a rainbow? Rainbows are caused when light rays from the sun (situated behind the observer) penetrates a rain water droplet and then is reflected back towards the observer. The light actually gets reflected in all sorts of directions but the shape of the raindrop causes much more of the light to be reflected at around 42° to the original light ray than occurs in other directions.

Of course there are lots of raindrops causing the light to be reflected in this way in all sorts of directions, but, as shown in diagram 4, I will only see the light from those raindrops that are in the correct part of the sky for the reflected ray to enter my eye. 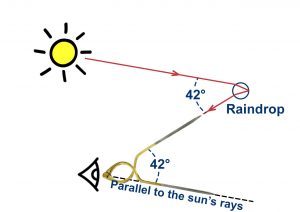 Diagram 5. Determining from which parts of the sky you will see reflected light.

Diagram 5 shows how to determine the area of the sky from which sunlight reflected through about 42° would reach your eye.

Imagine setting a pair of dividers to a 42° angle and holding them near your eye so that the lower leg is parallel to the direction of the sun’s rays (which are coming from behind you. Keeping the lower leg steady, rotate the dividers. The upper leg will trace out part of a circle centre on your eye. That arc is the part of the sky where you would see the rainbow.

In fact, different colours of light are bent (“refracted”) by a slightly different amount as the light passes through the raindrop for the reflection to take place. As a result, red light gets reflected back at about 42° from the direction of the sun and blue light is reflected at about 39° with the other colours in between. That is why we see the rainbow as a coloured arch rather than an arc of white light.

Two people viewing a rainbow will see it in slightly different parts of the sky… for each the curve of the rainbow will be centred on their own eyes because each person only sees the light which enters their own eye!