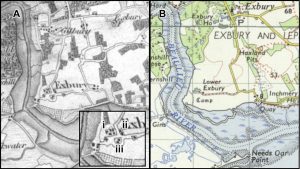 In Part (1) it was noted that an Hampshire Field Club publication suggested that the undulations in ground level, other than those associated with the Iron Age Fort, marked the “former post-medieval settlement of Lower Exbury which was moved to Exbury by the Mitford family in the 18th century” (Smith 1999, p.7). Here I question whether the observed undulations in field C can be so explained…

The most of the relocation of the village from Lower Exbury seems to have occurred in the early nineteenth century when the Beaulieu Churches web site says that William Mitford decided to build a new model village at the present Exbury location. The Lower Exbury chapel was demolished and the new Exbury chapel built in 1827, although burials had started at the new site from about 1810. These dates are compatible with what is shown on the First Edition One Inch Ordnance Survey Map, for which the survey was done about 1811 (Figure 6A). At that date the chapel is still shown in Lower Exbury and there is no chapel or significant village at the present Exbury location.

To understand the changes in the years after the 1811 survey, compare Figure 6A with the modern road and village location (Figure 6B). The road going north from Lower Exbury is now only a farm track and the route north towards Beaulieu has been moved to the east to provide more land for the present day Exbury House and Gardens. The existing Church was built at a junction with the new road. 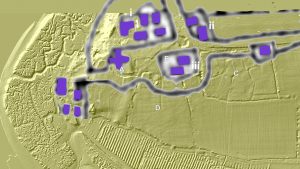 Figure 7: An enlargement of the groups of buildings shown on the 1811 map superimposed on the lidar image (coloured for clarity).

Inset on Figure 6A is an enlargement of Lower Exbury with the clusters of buildings labelled (i) to (iii). In Figure 7 these building groups have been co-located onto the lidar image (see Part 1, Figure 4). This suggests that cluster (i) represents the farm and out buildings (site of the “Palais des Vaches”), cluster (ii) the farm cottages, and cluster (ii) is in field 3. Apart from one building in the northeast corner, no buildings explain the undulations visible in field C. However one inch scale maps are diagrammatic in the depiction of roads and houses, and errors might have occurred in scaling the map, so this latter conclusion is not definite. 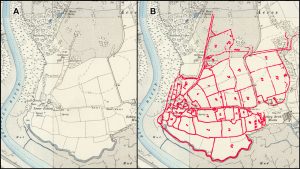 Fortunately The Exbury Estate Book contains a map of Exbury Farm (Page, 2018, p.288, Folio 102, 103a) showing the fields numbered with their areas listed. Figure 7 shows that these field boundaries are very similar to those existing on the 6″ OS map dating from the 1888 to 1913 period. Unfortunately, knowing to what date the farm map corresponds is a problem. The Estate Book covers the period 1711 to 1827, individual entries are often not dated, and the entries (“Folios”) are not necessarily in chronological sequence. Dates of similar entries in the same part of the Estate Book all seem to be around 1750 so possibly the farm map dates from around then. 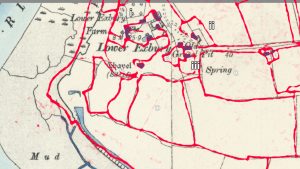 Figure 8: the Farm Map field outlines and buildings superimposed on the circa 1900 6″ OS map.

Figure 8 shows an enlargement of the Exbury farm map field boundaries (in red) superimposed on the circa 1900 6″ OS map with the positions of houses indicated in purple. This confirms what the 1811 1″ OS map indicated. Buildings in cluster (i) represent the farmhouse and the outbuildings some of which now house the Palais des Vaches gallery. Cluster (ii) are the farm cottages, and cluster (ii) are in field B. On the farm map there is a building which is presumably the chapel since it is so marked on the 6″ OS map. 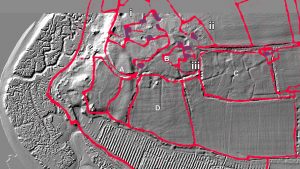 Superimposing the farm map boundaries on the lidar image (Figure 9) we can understand many of the features detected by the lidar. In particular the curved earthworks, the most obvious feature when standing in field A, appear to be mark a roadway going from the chapel area towards the river, possibly skirting the private grounds of the main farm house.

Like the 1″ OS map, the farm map does not show any buildings in field C which it lists as “Authurs Mead”. If the ground undulations in that field represent previous village roads and buildings, then these did not exist at the time of the map, most probably around 1750. Even if the farm map dates later, the good correspondence between it and the 1811 1″ OS map confirms that there were no buildings in field C at the time that the new Exbury Village was being founded in the early 19th century.

So it seems unlikely that the field C undulations represent the sites of village homes that were relocated to upper Exbury in the eighteenth century. It is possible that they were created after that time,  during World War II for example.

However an intriguing, alternative explanation is suggested by an item in the The Exbury Estate Book dating perhaps from around 1850 (Page, 2018, p.283, Folio 85a)….

An tradition “heard from aged inhabitants now many years dead” was that… “Exbury was a town or considerable village when on the expulsion of the Dauphin Lewis of France in the beginning of the Henry the thirds reign it was burnt by his French troops embarking there and the church so injured that the chancel only now the chapel remained in any degree entire”. The entry goes on to suggest that the architecture of the remaining chapel and “pieces of building stone in the adjoining fields” might offer testimony to this tradition.

Interpreted literally, this “tradition” does not make any sense. The first Dauphin was in 1350, long after Henry III (1216 to 1272). It possibly conflates various events during the time of the 100 Years War (1337-1453) including the French raid on Southampton (1338), and the Dissolution of the Monasteries (1536-1541) most of which events occurred under a later “King Henry”. The chapel is thought to have been of thirteenth century origin, which may correspond to Henry III’s reign. Until the Dissolution (by Henry VIII) it was serviced by Cistercian Monks from St Leonard’s or Beaulieu Abbey ( https://beaulieuchurches.org.uk/churches/exbury-church ).

But perhaps the verbal “tradition” preserves a memory that there was, at some time earlier than the eighteenth century, a larger village at Exbury. A possibility also suggested by the presence of buried building stones in the fields. This is pure speculation, but I do wonder if any archeological excavation has ever occurred in field C, and what any such an investigation might find?