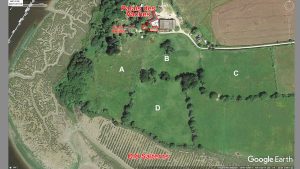 The person who kindly accompanied me in the Palais des Vaches art gallery (which was closed that day) also took me into the field south of the Gallery to show me the beautiful view to the Beaulieu River. She said that this “Fort Field” held an ancient camp and indeed, there were some curved earthworks which are visible in Figure 1 just beneath the label “A” (click on each of the Figures for a much clearer view). 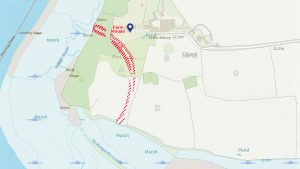 Figure 2: from English Heritage listing for the old farm house.

I was also told that that the original village of Exbury had been sited in the adjoining fields but it had all been moved to its present location. Intrigued I looked on the English heritage web site which listed the old Lower Exbury farm house, now a private home, and indicated the lines of a “fort”. However most of these did not seem to match the earthworks that were obvious in the field, I’ve emphasised them in red on Figure 2. 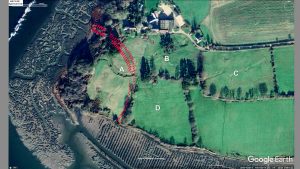 In the Google Earth image from January 2022 (Figure 3) the low sun angle results in long shadows from the trees. It also shows up well the undulations in the ground in fields labelled B, C, and D as well as the curved earthwork, A, which is the most obvious feature when standing in the field. However even on this photo it is hard to discern the earthwork marking the “fort” although that feature is marked on modern Ordnance Survey maps.. 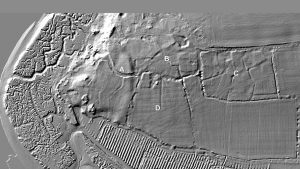 Figure 4: Lidar image of the area showing the fort and other earthworks.

The “fort” does show up on an image obtained by a lidar survey (Archi UK Maps) which also shows the ground undulations more clearly (Figure 4). It is described as an Iron Age promontory “hill fort” and the Hampshire Field Club have published a map of the earhworks (Smith 1999, p.8) which is presumably from a survey by the Royal Commision on the Historic Monuments of England in the 1990’s (Figure 5). The undulations in field D which show up in Figures 3 and 4 are not shown on this survey. Perhaps they indicate a relatively modern field drainage system, alternatively could they be marking previous strip farming? 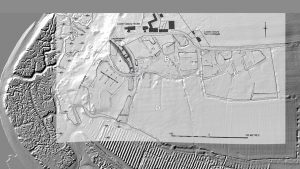 Figure 5: Lidar image with the plan from Smith 1999 overlaid.

Compared to the relatively gentle slopes associated with the “fort” earthworks, the more marked undulations in fields B and C are ascribed to the “former post-medieval settlement of Lower Exbury which was moved to Exbury by the Mitford family in the 18th century” (Smith 1999, p.7). However just what was moved from Lower Exbury to the present site of Exbury will be discussed in Part 2.  It will be questioned whether that move accounts for the ground undulations in field C or whether those represent the remains of an earlier, larger village.