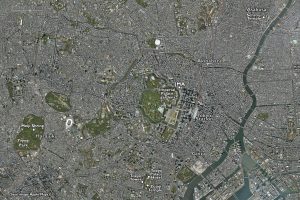 Locations I visited during this short trip

The 21st Session of the Joint Scientific Committee for the World Climate Research Programme was held from Monday, 13th, to Saturday, 18th March 2000, in Tokyo. I attended this, and over the years several other sessions of the JSC as an invited expert in air-sea fluxes.

I don’t think I was chosen because I knew more than other researchers in the field, rather because my oceanographic background which gave me insight into the observational problems in determining the fluxes. Other experts tended to be attached to Meteorological Centres or Agencies. 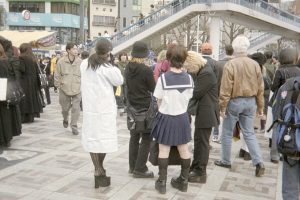 I didn’t extend this trip in order to travel around Japan as I had previously done in 1991. However looking at the two films of photographs I took it would appear that I probably arrived in Tokyo on Saturday 11th May.

On the Sunday I visited the Meiji Shrine and Yoyogi Park where traditional Japanese weddings were in contrast to open air Rock Bands and Cosplay enthusiasts. 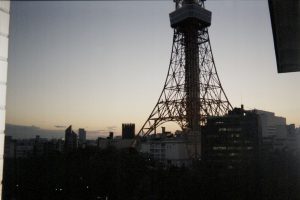 Tokyo Tower from my hotel room

I assume that the meeting was in the Japan Meteorological Agency which is among the area of office buildings to the east of the Imperial Palace and its surrounding moat and gardens. We were booked into the Tokyo Palace Hotel which was a few blocks south of that area close to the Tokyo Tower which I could see from my hotel room.

Walking to the meeting, and in the evening going for food, I fascinated by the small town feel of the back streets, and curious about the way the trees were wrapped and supported (photos of streets and trees). 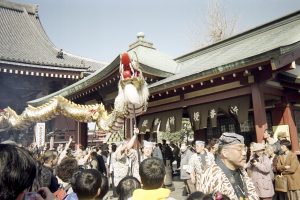 I must have been told that the Dragon Dance at the Sensoji Temple in the Asakusa district would be taking place on Saturday, 18th March; it is only performed on two days of the year.

I guess that it was on next day that I visited the Imperial Palace Gardens and the Zojoji Temple, close to the hotel, and then would have flown back to the UK that evening.