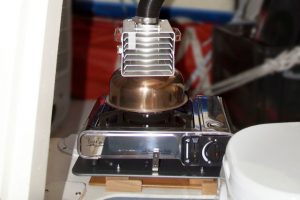 My Pan2000 cabin heater seemed an expensive purchase at the time but it has had a lot of use and is the nicest way of heating the cabin in the early mornings when I go out to the boat to read. It is faster and yet seems a more gentle heat than the mains electric fan heater that is also in Seatern.

However last autumn the computer fan which forces air through the heat exchanger started occasionally to run slowly. I replaced it with a “Noctua NF-A8 FLX” 12V 80mm Fan from Quiet PC . It’s good that the size of computer fans seems to be standardised!

Replacing it was just a case of bolting it in place and making the electrical connections, ignoring the yellow (control) lead. The fan comes with resistors which can be inserted to make it run slowler (and even more quietly), but I did not use them. The main noise comes from the air going through the heat exchanger in any case. 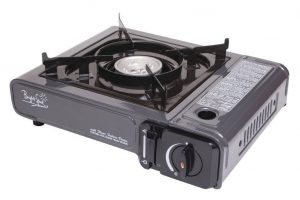 Then at the end of March the butane stove stopped working. The ignition spark still worked but no gas was coming out of the burner. The over-pressure cut-out did not seem to be triggered. I replaced the stove with a new Bright Spark BS100 bought from Nisbets. The first one that arrived had a faulty flame failure device but Nisbets were very efficient in sending out a replacement as well as arranging pickup of the faulty one.

The flame failure device is obviously important for a stove used inside the cabin and is the reason I buy the BS100 rather than cheaper models which look very similar. However I do get the impression that it is the part of the stove that fails the most often. 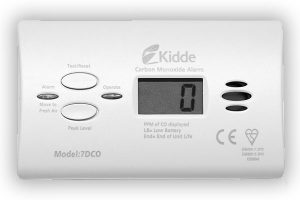 Finally, also during April, the  CO alarm announced that it had reached the end of its lifespan. I had not realised that they had a fixed life, independent of the battery supply. I replaced it with a Kidde model 7DCO alarm which is specifically stated to be suitable for use in boats. I’m not sure in what way it is different, some web sites say that the ones for boats and caravans are designed to withstand vibration, but it is not obviously different from other ones. Nor did it seem particularly more expensive.