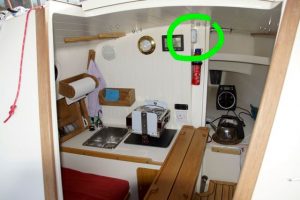 Choice of equipment, Installation, and Use: Generally in a small boat it is impossible to mount alarms the stipulated distance from the potential CO or smoke source le being away from… “doors and draughts”, “ceilings”, sinks, etc. This puts a constraint on the type of alarm which is suitable for installation.

Carbon Monoxide (CO): Initially I installed a “Firehawk CO78” CO alarm in the cabin as shown in the top photo. However as soon as I lit the stove the alarm always went off. I was fairly sure I was not dying so in the end the alarm got permanently switched off – which rather defeated the objective! In retrospect I realise I had installed it far too close to the stove position. 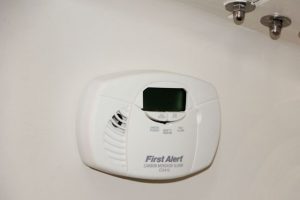 After a conversation from a neighbour who lives aboard his boat I then bought a First Alert CO410 alarm. This has a digital display of CO concentration and integrates your exposure level before sounding its alarm. Boiling a single cupful of water in the closed (but ventilated) cabin gradually raises the CO level to a peak of 100 – 120ppm. This is not enough to trigger the alarm which is specified to sound after 10 to 40 minutes exposure to 100ppm. As a guide, the alarm instructions say that 100ppm for 20 minutes should not affect average, healthy adults but may cause headaches after 4 hours. Experimenting with larger amounts of water in the kettle showed that, with my arrangement of stove and ventilation, the alarm actually triggers at around 20 minutes by which time the CO level is around 140ppm. For comparison, exposure to 400ppm can cause headaches after 35 minutes and kill in 2 hours. 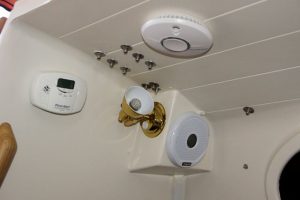 Conclusions: First… I was actually surprised that the stove was producing detectable CO since the bio-ethanol burns with a blue, almost invisible flame and does not soot up the bottom of the kettle. It was not obviously deprived of oxygen. I may try watering down the fuel which is supposed to help although I’m not sure why. Boiling a cup of tea within the cabin is OK but cooking should be done outside or with the cabin well ventilated. Second… Clearly some sort of CO alarm is vital particularly if using some form of cabin heater. However an on/off type of alarm proved too sensitive to be useful in the confines of a small boat. I would definitely recommend installing an alarm with a digital display. Third… A problem is that if any exhaust from the petrol outboard enters the cabin it triggers the alarm. This is a real nuisance.

Smoke Alarm: I installed FireAngel ST-620 “Thermoptek” smoke alarms, one in the cabin (visible in photo above) and one in the cockpit locker where the Torqeedo battery would be sited. These have a non-replaceable 10 year battery. They use optical and thermal sensing to detect a fire and are supposed to be “toast tolerant”, i.e. they can be installed near, but not in, a kitchen. Steam from the kettle occasionally sets off the cabin alarm; pressing the silence button resets it for around 10 minutes and it does not go off again due to the same cause.

Note (added 2017): The Smoke Alarm “10 year” battery lasted about 3 years. I have replaced it with an alarm which takes AA cells!