(1) Old Windows Painted: Back in Sepember 2020 I used up some of the Barn Paint left over from painting the shed windows by painting the french windows at the back of my house. The windows badly needed painting and the Barn paint seems to work well, however I was aware that the colour might look odd, as indeed it did, at least to my eyes.

I’ve still got lots of the Barn Paint left so I took advantage of a dry spell in April to paint the downstairs UPVC windows to either side of the doors in the hope of making the doors “fit in”. It seemed odd painting the UPVC but I’d originally heard of the Barn Paint from a neighbour across the road who had successfully painted theirs, so it should work OK.

(2) New Bedroom Window: The detached house next door to me was sold last year and the new owner is renting out the whole house as an “Air B&B” with the facility to accommodate up to nine people. My bedroom window looks out onto their garden and, in particular onto a covered “car port” which makes a good outside sitting area; a good place for smokers to use!  I’m a light sleeper, and even normal conversation amongst nine people would be enough to keep me awake, so I decided to make the bedroom window more “sound resistant”. 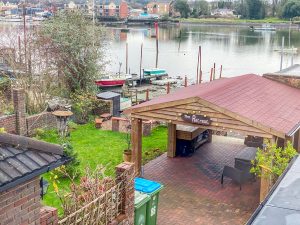 The next door “car port” area seen from my bedroom window.

Local firms favoured secondary glazing, which no doubt would have worked well as far as noise reduction, but at the expense of adding more physical separation. More difficult for example when I wanted to have the window open for ventilation. A sensible solution if I had a busy road outside my window but less suitable when most of the time it is a pleasant and relatively quiet river view.

I eventually settled on a replacement window from Hugo Carter, a London based company. This was an expensive solution, and I even had to pay for an initial visit! They quoted installation as being 10 to 14 weeks after placing an order and in the end it was 16 weeks. However installation was clean and very efficient. So far I am very pleased with the new window although it still has to face a noisy test. It is triple glazed and supposed to offer a 51dB noise reduction so, given the separation distance, it should significantly reduce the sound of normal conversation ( at around 40 to 60 dB) but would not cut out loud music. I have a recording of rain sounds that will help in masking any residual conversational sound… I shall see!

Looking through the window I found it hard to believe that it was triple glazed. However shining a torch through it showed reflections from three panes of glass. It also suggested, as I had been told, that the outer and the inner panes were each laminated from two different glass densities to alter the vibration characteristics and hence reduce sound transmission. Indeed, the installers commented on how heavy the larger glass unit was and said they had put in extra screws into the walls to support the weight of the lower sash. I had specified a side hanging for it making exit to the roof easier if the window ever did need to be used as an escape route. When closed it has multipoint locking to the frame. I suspect all modern windows have that. 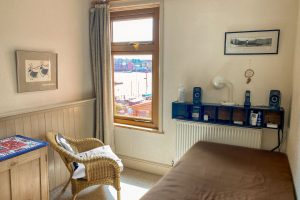 When I was thinking about changing the window, I started sitting up in the bedroom in an evening listening to music on my headphones while enjoying the river view. Now the new window is installed I’ve reaaranged the bedroom layout to make more space for sitting. As it come dusk there is often a bat (or bats ?) flying back and forth hunting insects. It’s strange that after living here nearly 25 years I’ve only just discovered the joys of doing that! 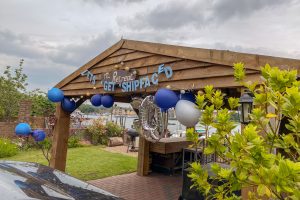 Postscript: the window soon had some testing and I have been pleasantly surprised at how well it works. On the 24th June a group held a 30th Birthday celebration. “Parties and Events” are not supposed to be allowed but admittedly this group were relatively quiet, sitting under the car port and talking. Then on Saturday 26th a party of young French students rented the house for one night. They had music playing in the evening loud enough to be disturbing in my living room (I used my sound cancelling earphones to watch TV). However I was really pleased to find that the music was not audible in my bedroom. So on both occasions the window coped with conversation amongst a group of people which I had hoped, but it also coped with moderately loud music in the garden. If the house continues to be rented for single nights to groups of young people I think I will be glad of my investment in the window!