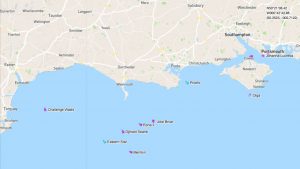 In 2020 the Royal Southampton Yacht Club were approached by Association of Sail Training Organisations to provide a start for their race from the Solent to Dartmouth as part of the Mayflower 400th anniversary celebrations. Due to the covid-19 epidemic, that race had to be postponed to 2021 becoming the Mayflower “401” race !

The RSYC Committee boat “Hound” will provided the start with the yachts racing to the east from a start line extending south from the vicinity of the Lepe Spit cardinal mark. The boats taking part were all being crewed by young people.

On Tuesday 17th August I arrived at Lepe Country Park early for my afternoon shift at NCI Stone Point to watch and photograph the start of the race. The first start was at 1030am with the more modern vessels starting some 10 minutes later. To be honest, as a spectacle it was disappointing. Not all the competitors had made it to the starting area and they assembled some way behind the line with the result that the boats crossed singly some time after the starting gun.

However, befitting her racing pedigree, the Jolie Brise crossed relatively promptly followed by the topsail schooner, Johanna Lucretia, which I’d seen while sailing Seatern last Thursday. The schooner Merrilyn arrived at the starting area late, having had engine problems in port.

The competitors which I did see start were:

Here are some photos of the event: