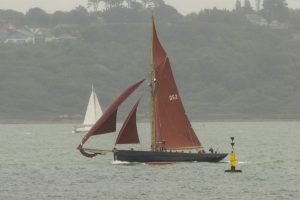 [photo album from the Jolie Brise]

When on Coastwatch at NCI Calshot Tower or NCI Stone Point I’ve often seen the gaff cutter Jolie Brise sailing on Southampton Water or the Solent and wondered what it would be like to be on her. So when she was a “feature boat” at this years Southampton Boat Show I took the opportunity to book a 3 hour sail on her on Thursday, 16th September.

Here is the publicity information from the Boat Show web site: 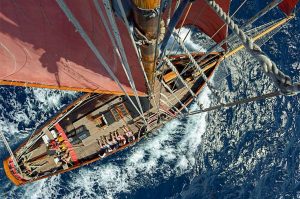 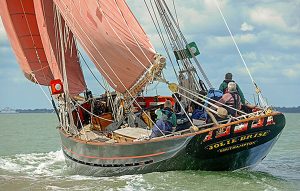 She has been operated, maintained and owned by Dauntsey’s School since 1977. Over the last 49 years, with Dauntsey’s students she has sailed 200 miles inside the Arctic Circle; has travelled as far East as St Petersburg in Russia; as far South as Western Sahara and as far West as South Carolina, and has covered in excess of 175,000 nautical miles. 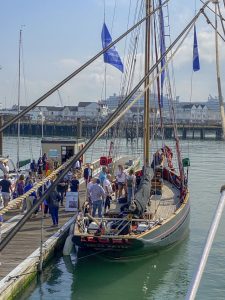 I’d woken up on Thursday morning to the sound of fog horns in the docks and there was very little wind during the whole morning. Even as we left the Boat Show pontoons there was worrying little wind. We motored out from the Boat Show to off Hythe before raising sail.

The wind dropped almost completely off Netley while I was helming so we motored a bit further up Southampton water until we picked up a 14 knot breeze and she was sailing with the lee scupper occasionally going under. She had heavy weather helm and I couldn’t get the hang of using a rope to give a two part purchase (it seemed back to front), but I think she would have been better trimmed with the mainsheet eased.

I called Calshot NCI as we passed  during a good sail out to the North Channel. With the sun shining and a truly jolie brise she was sailing beautifully.  Having gone about at Hill Head buoy in order to reach back to Southampton, I went out on the bowsprit where there was a good view of the bow wave and sails.

[photo album from the Jolie Brise]

Another featured vessel at the show was the Dutch sail training ship Morgenster. I had a look around her before joining the Jolie Brise, and we saw her leaving Southampton as we were returning off Dock Head.

Here are some photos… 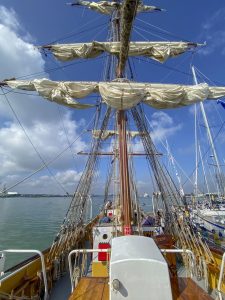 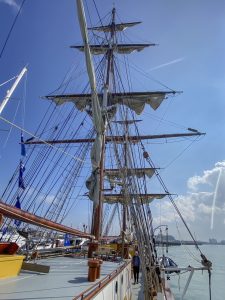 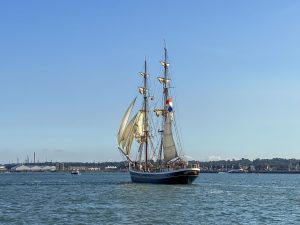 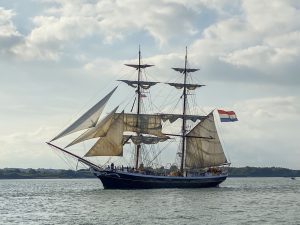