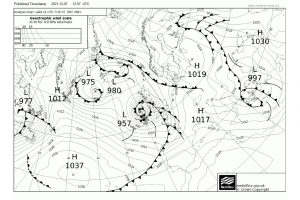 At 1411 gmt on Monday 6th December the Environment Agency put out a Flood Alert for the 4.67m midday tide the following day for a 0.6m storm surge coinciding with the second high water and a maximum 5.17m total tide height.  The cause was forecast force 7 southeasterly winds associated with storm Barra. Given that the NTSLF model seems to underestimate surge levels for Portsmouth by about 10 cm this was getting uncomfortably close to the 5.4m threshold to trigger the St Denys “Belsize” area flood plan. Neighbour Gavin distributed a warning note to houses with flood protection.

I was down for manning NCI Stone Point on the Tuesday afternoon with a trainee so, worried that if the situation deteriorated I might have to cancel at short notice, I phoned the rota officer to cancel my shift just in case. Soon after the decision was made not to open Stone Point due to the forecast high winds. On the day the lower car park was flooded at Lepe Country Park and the end of Calshot Spit got cut off by flooding on the access road.

By 0836 the next day the forecast was updated to 5.26m total tide. Aware that the first tidal peak was due about 1300 gmt I checked the jetty at about 1230 to find the water nearly level with the jetty and lifting the staging near the shed making it hard to open the downstream shed door! By 1300 gmt the public hard end of Priory Road was flooded but not too badly. The water level now had stopped rising and those of us who had been keeping an eye on it took time off for lunch.

When I next looked at the jetty about one hour later (1417 gmt) I was surprised to find it now awash! It was raining heavily, suggesting that this was the frontal passage. In Priory Road water was coming up through the drain covers and the water was threatening, but fortunately not entering, the houses nearest the public hard.

This second peak in the water level was very short lived. By the time I’d walked from my house to the public hard the level was already receding. It was only later at 1533 gmt that I noticed that the garden next to mine was flooding.

This was clearly an occasion when the storm surge prediction underestimated the size of the surge.