Monday 5th December 2022: I phone BT and tell them I will be no longer using BT from the end of my contract, that is from the 4th January onwards.  I had to wait to this date because BT ends the contract exactly 30 days after you tell them, not on a date that you might want it to end.  I was told that it was all arranged and that I would get a confirming email, but no email arrived.

Monday 12th December: I check my account on the “MyBT” part of their web site. I am paying £51-38 for Broadband plus pay-as-you-go landline phone. They charge quarterly in advance and “MyBT” says they will be taking the next £154-37 on the 8th January, 4 days after my contract with BT should end, to cover the first 3 months of 2023. I cancel my direct debit instruction to make sure they can not take the money. 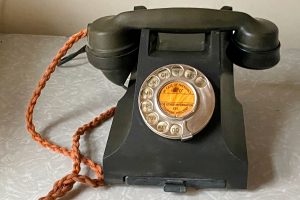 I phone BT again to confirm they have registered that I am leaving.  The helpful BT representative confirms that it has been arranged, that no email had been sent.  He has no way to send an email now because my leaving is already arranged which is when the message should go out.  After some discussion he gives me an order number which he says will confirm I am leaving. It is 19 characters long… VOL013-7334******82 and it is not obvious what I do with it.  However on the “MyBT” site under “orders and Faults” I find there is a “Track your order” menu item which gives me a list of completed orders; my “leaving BT” order is not there.

Tuesday 13th December: I get an email saying that, because I’ve cancelled my direct debit I’ll have to send a payment each time I get a bill and “If any of your payments are late, we might need to charge you extra”.  It has a link to my Account under “MyBT” which still says I’ll have to pay £154-37 on the 8th January.

Thursday 15th December: I get an email saying my contract is almost up. It confirms that I am currently paying “£51.38 a month for Broadband including Call Plan and that will continue to be £51.38 a month on 03 January 2023” – that is after the time that I’m leaving. However they are also offering me “A choice of new deals for you” which would upgrade me from “Halo” to “Fibre Halo 3” for either £63.56 or £58.17 and tie me to a 24 month contract.  Out of curiosity I look at the difference between “Halo” and “Fibre Halo 3” and find it is negligible as far as my needs are concerned.

Looking elsewhere on the web I find that if the full fibre service I’m getting from toob were available from BT in the area where I live it would cost me £85.99 a month!  Admittedly it would include a land line but I’ve decided I don’t need one and certainly not to pay over £1000 per year! For toob I’m paying £300 per year for a 900Mbs full fibre connection. 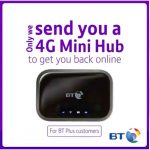 The email says that “If you’re happy with your package, you won’t have to do a thing.” implying that they will go on charging me.  There is no mention that I have already told them I am leaving.  This really is incredibly bad customer service, I’m glad I’ve cancelled the Direct debit!

Also on 15th December I get an email thanking me for returning the EE mini-hub, which I never needed and I did not request, although the list of completed orders says I requested it. I had posted it back on the 7th December and got a certificate of posting from the Post Office.  The return packaging did not ask for information as to who was sending it so at least BT had enough organisation to know it was me that had it.

Thursday 5th January 2023:  I’m now disconnected from BT and no longer have a landline phone.  Anyone dialling my old number is told that they have “dialled a wrong number”.  The “MyBT” web site now says that I owe nothing and that my next bill will be ready on the 10th January, presumably to charge me for any phone calls I might have made.  Since I always use my mobile, the cost should be zero.  The VOL013-7334******82 order to disconnect me now appears under “orders and faults” as completed although curiously under 4th January it lists the BT TV and BT Sport apps.  However under “My Products” it says “Add now”.  It also says Email is “included” with my products.  It has always been difficult to know exactly what contracts I’ve had with BT and when they started and stopped… that seems to continue after you leave!

Tuesday 24th January: I get an email saying that since I’ve cancelled BT Broadband my BT Cloud Storage will be removed in 30 days and I should download any data. I never used it but, when I sign on to make sure, I’m told it is no longer accessible!  One plus point for BT… they sent me a cheque for £4-51 because I had paid in advance for a day or two after the termination of my contract!