Some photos taken during short “exercise” walks during November. On the 4th November there were signs along the walkway towards town that a recent high tide had been lapping over it, signs of what was to come a month later! On the 13th November I walked along the beach at the Beaulieu River entrance to see if there was any signs left by the yacht incident the previous day. In the process I discovered the Exbury River quay.

Crossing Northam bridge on the 17th November I was entranced by the eddy street forming behind one of the bridge pillars. The next day, lower down on the same pillar but with the tide lower there looked to be a good number of large oysters. Given the sewage works up river, and the number of times Southern Water allows untreated discharges, I hope no one ever thinks of eating them. Being filter feeders, shell fish have the habit of concentrating contaminants. Also on the 18th November, one of the Harbour work boats looked to be busy around some of the river gypsy boats moored in the river. 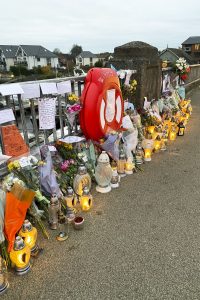 On the night of Sunday 7th November we had been disturbed by Rescue 175, the coastguard helicopter, searching along the river together with at least one Police rib and the Hamble lifeboat. I was puzzled since, although the coastguard appeared to be coordinating the search, there seemed to be more police involvement than usual. Then over the next day or two there were Hampshire Rescue volunteers searching the river banks, rather than Coastguard mobile units.

Sadly the body of 15 year old Marcel Wochna, was found downstream. It appears he entered the river near Cobden Bridge at around 1155pm on the Sunday to avoid the police, no doubt there will be an enquiry. A touching memorial has appeared on the bridge and has been maintained there for several days with candles burning in the lamps. I first saw it during the walk on the 18th November.

Having “discovered” Chessel Bay on a walk during October, on the 22nd November I confirmed that it was possible to walk right round to Woolston, provided the tide was not too high; photos are in a separate post.