In August 1985 a joint scientific assembly of IAMAP1 and IAPSO2 was held in Honolulu, on the island of Oahu, Hawaii. The meeting, with some 450 participants, was held in a large hotel (the Hilton Hawaiian Village I think?) at the Honolulu (north) end of Waikiki Bay. Nicky came on the trip with me, and  we extended the trip for a couple of days and hired a car to see a little more of the island of Oahu. 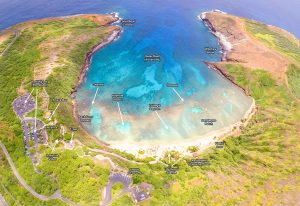 At some point during the trip we visited Hanauma Bay which, in those days was something of an unregulated tourist destination. All the same it was a fantastic experience to snorkel beside a coral reef. I followed a sea turtle down the reef edge until it got too deep for me. You could swim out with bread which fish would take from your lips – which was fine until the fish approaching me was a large grouper – I quickly spat the bread out! Nowadays the State Park is better controlled, which has to be a good thing!

2 International Association for the Physical Sciences of the Ocean 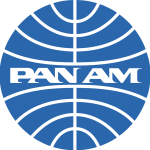 Footnote: I was always expected to use the cheapest flight possible and the work Travel Agent had obtained a very good deal on Pan-Am which was in financial trouble. We didn’t know it but the Pacific Division had just been sold to Eastern Airlines. Going out, there was chaos changing planes at Los Angeles International (LAX). Packs of Duty Free goodies (promised as part of the cheap deal) and seat allocations never happened since we had been shuffled to a different flight.

Coming back (when I unknowingly had chickenpox) we got to Honolulu Airport very early having dropped off the hire car. This was very fortunate! The check-in clerk took a first look at the aircraft manifest and said that, after he checked us in, he was going to take the day off because two plane loads of passengers were scheduled for the single flight! We did eventually get back to Heathrow having watched Hitchcock’s “Vertigo” several times since it was the only film they had available to show.

That was the only time I ever flew Pan-Am!