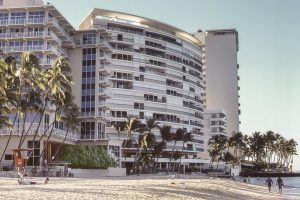 The 1960’s apartment block (centre) with the New Otani Hotel at left behind the palm trees.

At the recommendation of a scientific contact at the University of Hawaii, we stayed at the New Otani Kaimana Beach Hotel which is situated at the Diamond Head (south) end of Waikiki Bay. New Otani is a Japanese hotel company, and the hotel had a more relaxed atmosphere than one might find in a similar American hotel. It is separated from the main Waikiki hotel area by the Sans Souci State Park which I would walk through on the way to the meeting. 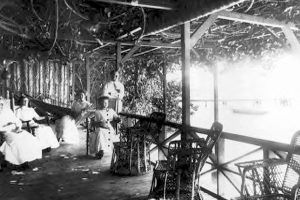 In 1893 Robert Louis Stevenson stayed at the Sans Souci Hotel (the name means “carefree”) which used to be situated where the large apartment block was built in 1960.

The New Otani stands next door on a site where, in RLS’s time,  there was a hau tree lanai (open porch/living area) belonging to the MacInery estate. The hotel dining area maintains that tradition, being a hau tree covered lanai fronted by an old balustrade, which was said to have come from the estate. 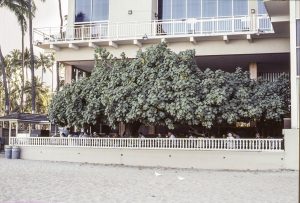 A beautiful place for breakfast.

It was a beautiful place to have breakfast even if, as on one occasion, light rain was falling. In the Hawaiian warmth, any dampness soon evaporates and people sunbathing on the beach would not be disturbed by a little rain!

Part of the beach outside the hotel was a shallow “reef” which I assume was an old lava flow; nearby Diamond Head is an extinct volcano. We got sunburnt swimming over it early in the trip despite having taken precautions against the sun – Honolulu is only 21°N and the sun is hot! We could just about see the reef area of the water from our hotel room; we were staying at US Government rates so didn’t qualify for a better sea view! 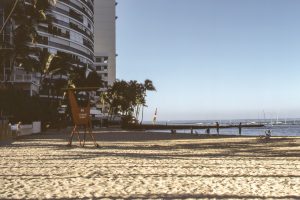 On various beaches we saw burrows in the sand, which we guessed were made by crabs. On the last eventing we picnicked on the beach and the next morning I appeared to have lots of sand-fly bites. It turned out to be chicken-pox, presumably caught on the flight out. No doubt I unwittingly infected others on the flight back! 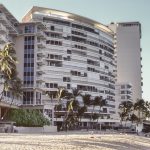 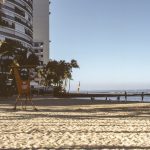 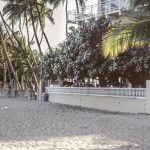 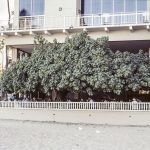 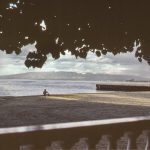 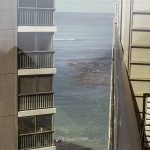 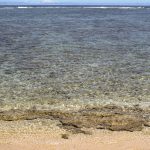 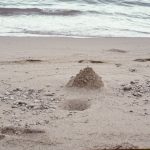 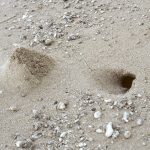 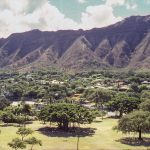