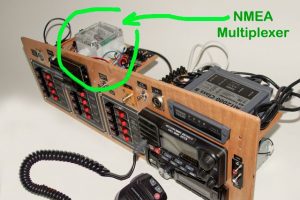 What it does: By modern standards NMEA0183 is a primitive data protocol. It allows one instrument (the “talker”) to provide data to one or more other instruments (the “listeners”) who can listen to that one instrument only. The multiplexer overcomes this limitation by receiving the information from a number of talkers and providing the combined information to any instrument which wants to listen. For example, I might want the tiller pilot to either steer towards a way point using data coming from the chart plotter, or to steer according to the wind direction using data from the mast head wind sensor. Without the multiplexer only one of these data streams could be used.

Choice of equipment: I chose to use a data multiplexer because:

I chose to use the Actisense NDC-4 multiplexer because of the following additional factors:

Installation: it is installed behind the electronics panel with a front panel USB socket allowing a laptop to be connected to monitor the NMEA data stream for diagnostic purposes if required. Note that to avoid possible damage due to earth loops the laptop should be operated from its batteries, not the mains.

In Use: Probably it is not really needed. The NMEA output from both the Echomap and the AIS transponder can be configured to prevent verbose data streams. The aim to provide wind data to the tiller pilot failed because the Raymarine Tiller Pilot does not understand the specific format of the wind data provided by the NASA instrument. I suspect Raymarine want you to buy their own (very expensive) wind instrument. It does provide the redundancy of position data and it does overcome the “single-sided” to “double-sided” connection problem; however these are luxuries rather than necessities!

Despite that, would I fit it on another occasion? Probably “yes” because of the double-sided connection problem. It overcomes that by electronically isolating different instruments by using optical links. However some instruments possibly do that internally anyway, and my decision is probably influenced more by my past experience on oceanographic research ships rather than what is actually needed on a yacht.