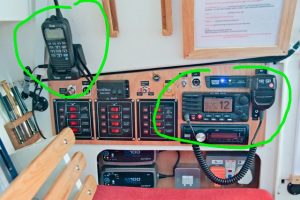 Choice of equipment – Radio: I already owned an ICOM handheld DSC radio for use when dinghy sailing and I was tempted to use that by removing the aerial and connecting the mast-top aerial cable to it. However a fixed radio has more transmitter power than a handheld. I chose the Standard Horizon because at that time, it was the only one offering AIS reception as well as it’s role as a marine DSC VHF. The idea was that it would save money compared to buying a VHF radio, antenna splitter, and AIS receiver separately. Subsequently I decided to install an AIS transponder with a dedicated aerial so I actually spent more than I needed in choosing this radio. 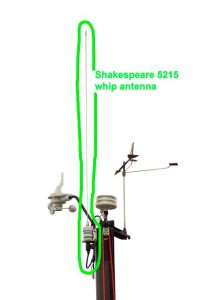 Choice of equipment – Antenna: I was, and still am, confused by the specifications for marine VHF antennas. Many of them are sold with around 20m of RG58 grade cable, and in some cases they specify that the cable can’t be shortened because it is part of the antenna system. However RG58 cable is only recommended for cable runs of a few metres or less and over 20m there will be significant signal attenuation. Practical Boat Owner tested antennas in October 2012 and the best buy was the Shakespeare “Squatty body 5215” antenna so I chose that. This antenna is not supplied with cable attached so rather than RG58 I used mini RG8X which is supposedly better quality. One consequence of this choice was I could not save mast head space by using a combined Windex+antenna unit. 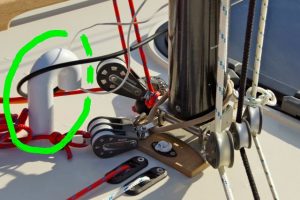 Installation: Swallow Boats ran the cable though the mast and mounted the antenna. They did not wrap the plug at the antenna with the amalgamating tape I had provided which annoyed me since preventing water entry into the cable is imperative. Fortunately I noticed almost straight away. At my request, and to Matt’s disgust, they installed a cable “gooseneck” designed by me out of a waste pipe fitting, to take the cables into the cabin (see photo).

The unlike most of the equipment which is removed when the boat is at the jetty, the VHF radio is permanently mounted in the electronics panel. It is permanently marked using “Smartwater” and engraved on the rear casing with the house number and postcode – however neither are obvious from the front! Of course it also has a unique and hard to change MMSI number so I’m hoping people realise it’s not worth stealing! I have a connection through to the cockpit where a Standard Horizon RAM3 remote unit can be mounted. That allows the radio to be fully used even if the cabin is closed up. There is also a waterproof NASA speaker to boost the volume. 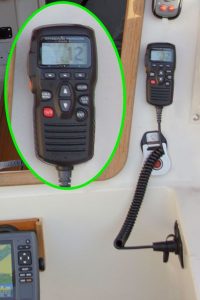 In Use: The tests I did on the radio before installation showed that it did indeed receive the AIS information and provide it to the Garmin Echomap for plotting on the navigation chart. The RAM3 remote has proved to be my normal way of controlling the radio and the NASA external speaker is invaluable now that I have a petrol outboard. I also have a public address speaker which can be attached to the VHF and used as a hailer or as an automatic fog horn. It mounts in the same cabin top holder as my auxiliary steaming light (used when the mast is lowered). I haven’t had to use the fog horn yet! My cable gooseneck design worked well in that it allowed the cables to be easily fed into the cabin, including the VHF cable with its plug attached. Unfortunately it was too easy for the jib sheets to catch on it so I’ve replaced it with a standard cable gland (don’t tell Matt!).