Note: the following describes my original installation which was designed with the hope of using the Torqeedo electric outboard on Seatern. See the footnote for my present installation. 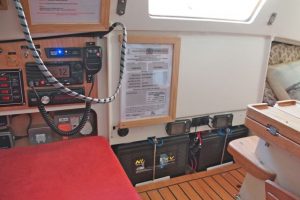 Choice of equipment: I already had two leisure batteries and two NASA BM1 compact monitors installed in battery boxes for use with the Torqeedo outboard on my Seafly dinghy. I also had one Ctek M100 charger. I decided to buy a second M100 charger rather than a larger dual charger in order to keep the two battery systems completely independent.The M100 does not have a cooling fan to create noise at night – you can hear it click on and off occasionally but it’s too quiet to disturb sleeping (and I’m a light sleeper). 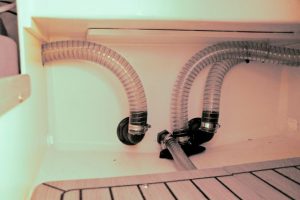 Installation: I’d hoped the battery boxes would fit under the companionway but the pipework for the water ballast and bilge pumps prevented that. I made some battery platforms which slot into the available space with the NASA battery monitors and their shunts mounted on a panel above. 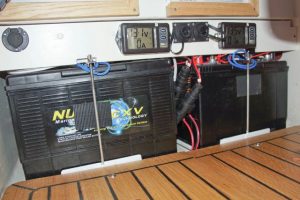 In normal use “battery 1” powers the instrumentation, lights, and other low load but continuous power draws. “Battery 2” powers the potentially high load but intermittent items: Ballast pump, Tiller Pilot, (and originally) Torqeedo charging. However the inline plugs and sockets visible between the batteries can be disconnected and plugged into the sockets above them in order either to switch over the allocation of the batteries, or to allow one battery to supply all functions. More recently I’ve arranged for the Cool Box also to be powered from battery 2 to spread the load.

On my first over-night trip (9th-10th June 2014) battery 1 started showing “0%” charge on the monitor, although it would apparently recover if the load was reduced. I think that the batteries are coming to the end of their life, possibly because when I first had them they were used with a Minn-Kota trolling motor which discharged them at a very high rate. I have now replaced them with two Yuasa Marine 100Ah batteries which have deep discharge and traction capability. I chose them partly because they were the correct physical size to fit in Seatern! 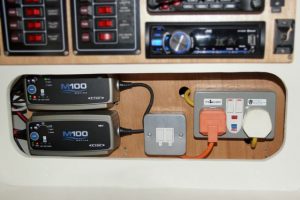 When at the jetty the mains cable from the shore is plugged into a socket in the cockpit. This supplies the 13 amp RCD equipped dual sockets situated in a recess under the electronics board. The orange plug feeds the Ctek chargers via the double switch. The white plug feeds three sockets situated elsewhere in the cabin. These are used for mains supply to the Waeco cool box, an electric kettle, and a fan heater (or more recently, dehumidifier). The kettle, fan heater, and/or dehumidifier are only in Seatern when she is at my jetty and cannot all be used simultaneously since they would exceed 3kW (the armoured cable out to the jetty is protected by a 13 amp fuse as well as an RCD, and there is a further 13 amp fuse in the white plug).

In Use: The system works well, giving me a relatively large electrical power store. However having the weight of two large leisure batteries in the boat was a luxury I justified through the weight saved by using the Torqeedo electric outboard ( batteries + outboard = 54kg) rather than a petrol outboard, fuel tank, and single battery (total around 57kg if tank full). Now that I’m using a petrol outboard I’m wondering if the weight of the batteries could be offset by blocking off part of the aft ballast tank (since the batteries are directly forward of it). At present the two batteries, outboard, and fuel tank come to around 77kg i.e. the same as a 12 stone person. Given that I sail single handed maybe that’s OK.

Footnote (2017): I’m now have a power generator which I can use to recharge the battery if I’m away for more than a day or so; as a result one battery and one charger has been removed and all the electrics run off the remaining battery. After consulting Matt, I have an inflated buoyancy bag in the aft ballast compartment of a size such that it offsets the weight of the single battery when the ballast tank is full.