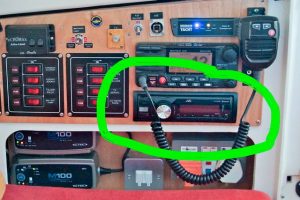 Choice of equipment: The JVC KD-X250BT “Digital Media Receiver” is basically a car radio which is also designed to interact with an ipod/iphone (displaying the title of the track playing and, if you want, controlling the track played). It also has a front panel socket for amplifying signals from a head phone outlet. The latter amplifies sound from my laptop when it is acting as a TV.

Installation: The receiver is mounted in the electronics panel – the front panel of the receiver is removable to discourage theft; however I noticed our local car shop was selling these at £40; so I suspect they are about to be replaced by a newer version and aren’t particularly desirable! It is connected to the marine VHF aerial through a splitter. Being a car radio it supports front and rear pairs of speakers. I defined the “front” to be the aft cabin bulkhead and built loudspeaker enclosures to take 4 inch diameter “Fusion” speakers. The enclosures hide the back of the NASA wind repeaters mounted in the cockpit and also provide connections for (to port) a cabin light and (to starboard) a chart table light and the hatch top instrument console.

For the “rear” speakers I used 4″ waterproof speakers from Force 4 since I had these already. I made an enclosure for the starboard one which also hides connections to a cabin light and the starboard auxiliary navigation light. The port speaker is mounted in the cabin bulkhead. 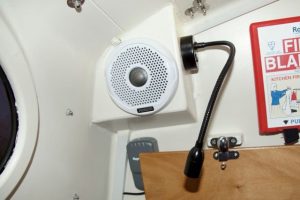 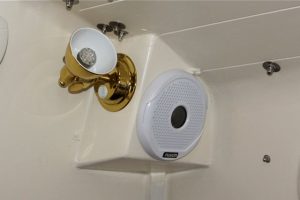 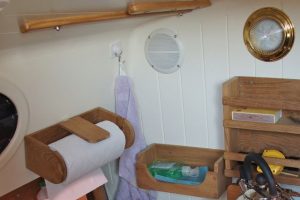 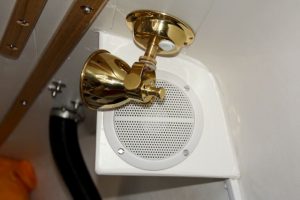 In Use: Possibly because the JVC is designed for car use where there’s lots of power, 12V consumption is approaching 1 amp. I don’t know if a specific marine system would be more economical*. The use of my marine VHF aerial through a splitter works OK except for sometimes picking up very low level background noise when the boat is plugged into the mains electricity for charging the batteries. I assume the noise is due to the common earth arrangement.

The interface with the iPhone works well for playing music and the sound is very good. The Fusion speakers are rated at 120W whereas the Force 4 speakers are only 20W. However the JVC has a “low” power setting to protect the smaller speakers, and they are also set to less volume using the Fade control. That said, sound through the Fusion speakers is so good that I may replace the Force 4 speakers with Fusion units (later note: I have done this!).

I think some versions of the JVC come with a remote control. On cold mornings it would be nice to be able to switch on the shipping forecast without leaving the bunk! I can just about reach across the cabin but the on/off button is not illuminated and hard to locate by touch! Otherwise I’m very happy with the unit.

* I’ve since enquired at the Fusion stand at the Boat Show and it appears that they are not!