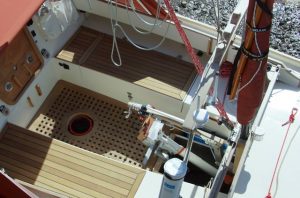 Choice of equipment: An electric outboard was preferred because compared to a petrol outboard they are: quiet, light and small (easy to transfer to the inflatable), and supposedly more reliable and easy to maintain. I already owned a Torqeedo 1003 which is claimed to be equivalent to a 3 to 4 hp petrol outboard and be suitable for powering day sailers up to 1.5 tons. Larger outboards such as the Torqeedo Cruise 2 are prohibitively expensive (including battery, around £5000). Most other makes of electric motors do not claim as much power.

Installation: To fit in the outboard well, the effective shaft length had to be shortened by 5 cm by sliding the stainless motor shaft up in the mounting bracket and shortening the fairing by a similar length. I have described this in detail on the Swallow Boats Association web site.

The Lithium-ion battery was situated in the cockpit locker and connected to the motor by a Torqeedo 1920-00 extension cable. The battery would be recharged in situ so in case of over-heating (a very small but potentially catastrophic risk), a smoke detector and a fire extinguisher were mounted in the cockpit locker and a fire blanket fixed just inside the companionway. The Torqeedo battery charging socket was connected to the 12V supply via a dedicated 2 core cable from the switch panel (current is about 3A). 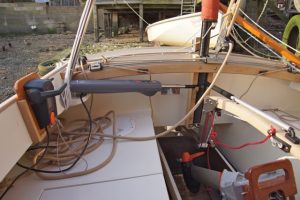 A Torqeedo 1918-00 remote throttle unit with extension cable was fixed to a plywood mount which could be slotted into brackets fixed at various positions in the cockpit. For normal use the motor steering was locked and the boat rudder used for steering. I made a wooden handle to fit where the battery would be to help in lifting or steering the motor. The remote throttle and the lifting handle can be seen in the photo.

In Use (good points!):  Compared to a petrol outboard the Torqeedo is very quiet (although the gear box whine can get on ones nerves) and, even when raised, takes up little space in the cockpit. Provided one stayed at around 2 to 3 knots it could take Seatern down the river to Southampton Water, and then be recharged from the 12V supply during a day’s sailing. Thus I’d have almost a full battery for the return up the river. I have used the Torqeedo on my inflatable and, although I haven’t done it, it would be a practical option to transfer it from Seatern to the dinghy while at anchor. Finally, the weight of the motor, and batteries is distributed lower down and more central in the hull compared to a petrol outboard.

Limitations of power, thrust, and range. Despite my hopes, I gave up using the Torqeedo because these factors were significantly restricting my use of Seatern.

Conclusions: Used on a BC20 the Torqeedo 1003 is probably OK if you can manage with something like a 2 hp outboard. Probably OK on a lake but severely limiting in tidal waters. The limitations of the Lithium-ion battery and design of the motor/propeller unit are such that the full power quoted is not in practice a reality. An implication is that some of the larger electric trolling motors which are now available (for example the Mariner Varimax FWV55HT) in practice may offer similar performance to that available from the Torqeedo but at less expense. They also have the advantage of using a 12V power supply. However I have not tried that option and it must be remembered that the rate of discharge required to power those motors (several tens of amps) will significantly reduce the available capacity of standard 12V lead acid batteries. 12V Lithium Iron Phosphate batteries might be a better choice.

N.B. The opinions expressed are my own and relate to my own requirements; there may be ways around some problems identified. Other users will have different priorities from me!