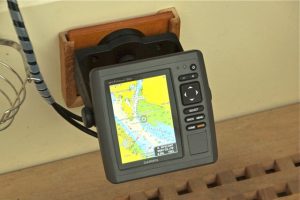 Choice of equipment: As a scientist I have a strong background in computer use so I looked carefully at using a laptop or tablet (e.g. iPad, Nexus) together with open source type applications for navigation. I also have a Garmin Etrex Vista HCx handheld GPS unit bought for hiking and I have been constantly frustrated at it’s very poor computer support software and difficulty of use. I swore never to buy Garmin again!

Despite all I’ve just said, in the end I chose a Garmin Echomap 50s! At the time, Garmin were in the process of restructuring their GPSmap and Echomap product ranges, and the Echomap with it’s included charts seemed to offer the best value for money compared to other chart plotter/sounder combinations which were then available (including the existing GPSmap units). The main reasons for not choosing to use a computer or tablet were:

Installation: Swallow Boats installed the echosounder transducer in the under-sink cupboard. The attached cable, which cannot be shortened, is routed through the under seat locker, behind the 12V batteries, and out above the electronics panel. Beyond that point it is combined with the Garmin power cable by wrapping them together in cable tidy. The Echomap 50s is mounted on a small piece of marine ply which can be slotted into teak “iPad holders” obtained from K.J.Howells of Poole. This allows the Echomap to be mounted above the electronics unit in the cabin or, in the cockpit, central below the companionway or higher to either side of it. If the washboards are in place, a V-shaped vent inserted in the bottom washboard allows the cable to be connected. The different positions are indicated on these illustrations (with multiple Echomax units created using photoshop): 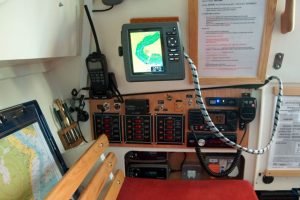 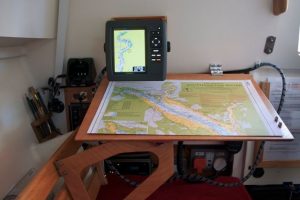 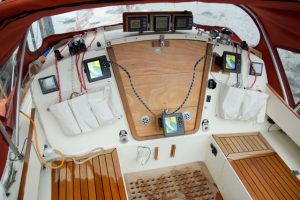 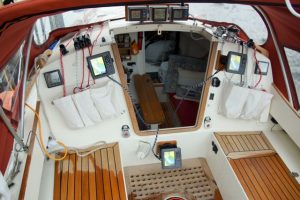 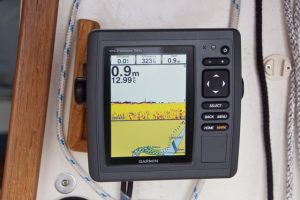 In Use: I was worried that the centreboard would be too close to the echo sounder beam but there is no problem and the sounder works very well. In shallow water, split screen mode (illustrated) is very useful. Normally I have the Echomax mounted centrally below the companionway, however when I need to be able to see detail on the screen the higher positions (either port or starboard) are very useful.

AIS information from nearby ships, received either by my AIS transponder or by the VHF radio, are displayed on the charts. However when a ship is on a collision course, even if only for a short time, a red wreck indication gets plotted at the predicted collision point. This persists even after the danger has ceased. In Southampton Water in summer I imagine having to turn off the AIS functions in order to get rid of all the red “collisions”. I have the audible “collision” alarm turned off for the similar reason. Possibly there is a way round these problems. However, the manuals for the Echomax and the software are extremely poor – Garmin seems to rely on user forums to tell you how to use their product. Otherwise you just have to experiment with the unit’s menu structure.

Another problem is the power consumed. There is no way to turn off the display and switching off the sounder does not seem to make much difference. Leaving it on at night (for the anchor alarm) means having a significant power drain. When one battery did get low the Garmin “browned out” and didn’t recover until the next day when I was back at home.

Seatern’s track is recorded and can be transferred to a microSD card (not the most practical thing to handle on a boat). It can then get plotted on a computer using Garmin’s “Homeport” software. The most useful feature of this is to export the data for plotting in Google Earth. It all works… sort of, but I can’t help but think that Garmin’s products would be so much better if they embraced rather than obstructed the open-software community.

In summary, I’m still in two minds as to whether this was the best choice – however I think it’s better than using a laptop simply because of the visibility factor and the depth sounding.